View source
watch 01:50
Who is Aelle?
Do you like this video?
Play Sound

Ælle and Aethelwulf have another brother, whose name is not mentioned. They recall how he left for the Kingdom of Mercia, where he died.

Ælle's hatred toward Ragnar begins with their first encounter. Ragnar defeats his men twice and plunders his kingdom. Ælle executes Wigea, one of his lieutenants, for his failure to suppress Ragnar's raids. Then, Ragnar demands 2,000 pounds not to attack Ælle's kingdom and to release his brother Aethelwulf, who was recently captured. Ælle springs a trap, but Ragnar and his troops repel the attack. Ragnar in a fit of rage then kills Aethelwulf and Ælle pays the ransom. King Ælle is consistently unprepared for the fury of the Northern raiders and finds himself outplayed and outfoxed at every turn by Ragnar. His own brother is slain at Ragnar's hand and his armies are broken. Ælle swears unremitting vengeance upon the Vikings.

In a surprising move, King Ælle agrees to King Ecbert's plan to make peace with the Vikings and employ them as mercenaries in Mercia, despite his oath of vengeance against Ragnar. He then reluctantly volunteers as a hostage in an exchange with him against Rollo, injured and captured during the battle.

He is present with King Ecbert, Ragnar, Lagertha, Rollo, Aethelwulf, and Judith, when Kwenthrith poisons Burgred and becomes Queen of Mercia. He looks positively disgusted with Princess Kwenthrith for poisoning her own brother right in the middle of a feast in front of everybody.

Always allied with King Ecbert, the two kings make a pact: to share Mercia between them. But after Queen Kwenthrith's death, Ecbert betrays Ælle and becomes King of Mercia. Ælle swears of to avenge Ecbert's betrayal. King Ælle comes to resent King Ecbert for his illicit affair with his daughter Judith, who is Ecbert's daughter-in-law. Ælle further resents Ecbert for betraying him in the Mercian Civil War. Ælle rejects aid from Wessex, which ends up costing him his life.

Later, Ælle has the pleasure to see Ragnar in a cage as a gift for him. He shows no mercy, having him beaten and tortured, before throwing him into a pit of snakes. After Ragnar's death, Judith warns King Ælle that he has no idea of the revenge of Ragnar's sons and the consequences of his actions, but she receives only contempt from her father. Arrogant, her father confirms to her that they are fully prepared for the battle and refuses to demand Ecbert's help. Later, he goes to fight Ragnar's sons and their army with Bishop Unwan and his army. He then spots and boisterously mocks a small group of the Viking Army under the belief that this is their entire army, but then his confidence begins to waver as he witnesses the whole of the Great Heathen Army assemble with overwhelming numbers. Bjorn, Ivar, Sigurd, Hvitserk, Floki, and their forces then charge Ælle's front lines effectively destroying his forces. Ælle is captured and dragged behind Ivar's war chariot. Ælle is released and forced to show them the place where Ragnar was executed. Bjorn then repeats the same exact words that Ragnar said as Ælle tortured him. In a fit of cowardice, Ælle demands how much gold and silver they want to spare his life, but Ivar responds by stating that his father, Ragnar, was worth more than simple gold and silver, effectively stating that Ælle's time is over. Ælle is then executed by Bjorn by the Blood Eagle,, much to the pleasure of his brothers, and his corpse is hung at the pit where Ragnar was executed. Bjorn, his brothers, and Floki are satisfied with having avenged their father and friend.

King Ælle is boisterous and warlike by nature. He prefers to spend his time feasting. He acts loudly and intrusively when intoxicated. For example, he hugs an uncomfortable King Ecbert in the bathhouse while shouting praises about the victory over the Vikings. He has a particular thirst for bloodshed. He punishes failure with torturous executions. He relishes giving people cruel and unusual deaths, eventually ending up on the receiving end when the sons of Ragnar give him the Blood Eagle. His personality is contrasted with King Ecbert’s. Ælle is bloodthirsty, loud, and boisterous, while Ecbert is milder and more calculating. Whenever Ælle feels like he wants to make a point, or when he’s agitated, he starts shouting every single word. He is a generally unpleasant man who treats his underlings and family members like dirt when it suits him. For example, he throws a man into a snake pit for failure, betrays his own brother, tells his daughter she’s a bad wife and mother and that he’d gladly allow her husband to beat her into submission. Although he does seem to have some affection for his wife and son, he does not care that much for Judith or love her.

As a ruler, King Ælle does hear the opinions of his entire court, no matter how disparate they are, when trying to find a solution to the Norse raiders. He also lets messengers freely into his court and listens to their information closely. He has moments of sardonic wit, especially with incompetent people. King Ælle is fervently and rigidly pious. To the point that he underestimates the Vikings because he views them as heathens who do not have God’s favor. He does not consider himself obligated to honor any agreements with the Vikings because they are pagans. His sense of diplomacy and righteousness are frequently replaced with anger when he felt betrayed or that he was acting on God’s will.

King Ælle of Northumbria, according to some historical accounts, was responsible for the death of Viking hero Ragnar Lothbrok. Shipwrecked on the shores of Northumbria, Ragnar was captured. Ælle had him thrown into a pit full of venomous snakes. "How the little pigs would grunt," Ragnar is reported to have said, "if they knew how the old boar suffers!" The "little pigs" is Ragnar's term of endearment for his sons, who did more than "grunt." Word of their father's death galvanized them into action. The Icelandic saga, The Tale of Ragnar's Sons and the writings of Symeon of Durham (d. 1129) are the main sources on the Northumbrian King Ælle. Though depicted in the series as being King of Northumbria in the 790's-early 800's AD, the real-life King Ælle was alive in the 860's AD some sixty-seventy years later, and was king for at least two years. This was not enough time to cement permanent dynastic rule before the invasion of the Great Heathen Army.

Ivan Kaye with his fake self after shooting the Blood Eagle.

Alle and Ecbert forming an alliance. 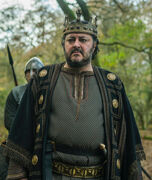 King Aelle and Judith in Scarred