From their newly set up camp, the Vikings attack the Northumbrians by cover of night. They are able to capture the king's brother Lord Æthelwulf. Ragnar demands a lot of money for the Vikings' peaceful departure. King Ælle agrees to this if one of the Vikings is baptized as a Christian. Rollo volunteers and is baptized. Instead of paying the monetary demands, Ælle attacks the Vikings' camp. Rollo in particular, fights extra hard to prove he hasn't forsaken the true gods. Ragnar sends Æthelwulf's body to the king and he finally pays the agreed upon amount. Back home Lagertha is ruling over Kattegat. Siggy offers Lagertha her services and Lagertha accepts.

Lord Æthelwulf has been charged with leading King Ælle's armies against Ragnar and his men. Ragnar sets up camp and waits for the Northumbrian soldiers to arrive. Meanwhile in Scandinavia, Lagertha runs Kattegat and deals with petitioners. Æthelwulf observes from above the camp that the Vikings have made. They decide not to strike but to somehow make the Vikings give up their position. Rollo and Ragnar are aware of them watching but Ragnar says that he first wants to see what they'll do. In the middle of the night, Ragnar and his group of men attack. They win and take the camp captive. Ragnar asks Æthelwulf if they shall go visit the King. King Ælle is upset that his brother has lost. The cardinal thinks that this is the work of God while another thinks it's the work of the devil. One lord thinks that they should just pay off the Vikings so that they'll go away. The Vikings arrive and are invited in to talk with King Ælle. Instead, they turn around and head back the way they came. They return later because Ragnar wants to see the way that they live. He is brought before King Ælle and they are invited to the feast. King Ælle asks what it would take for the Vikings to leave and to hand over his brother. Ragnar says two thousand pounds. The King accepts his terms but tells them that they must remain in their camp until he can round up that kind of money. He also says that he wants one of Ragnar's group to become Christian. Rollo volunteers to be baptized.

Siggy goes to visit Lagertha. She tells Lagertha that she'd like to serve her. Lagertha says that it's not necessary but Athelstan points out that it could help Siggy be happy. Lagertha says that if it's really what she wants then she accepts her offer. She tells Siggy that she and her daughter are now under her protection. Rollo is baptized and King Ælle tells Ragnar to return to his ships to await payment. Gyda can't sleep so she goes to lay with Lagertha. Floki is upset with Rollo because he feels like he betrayed the gods. King Ælle is true to his word and sends a cart full of money. Or so they think, but once they check, the boxes they are empty. King Ælle's men attack them unawares but Ragnar and his men face them head-on. During the fight, Rollo kills many Christians to prove to Floki that Odin is no longer mad at him. After, Ragnar goes to talk with Lord Æthelwulf. Lord Æthelwulf asks him to give him the chance to talk to his brother to persuade him to keep his word. Ragnar asks why shouldn't he just kill him now and Æthelwulf says because then he'd have nothing left to bargain with. Ragnar does kill him and sends him back to King Ælle by attaching him to a horse.

Lagertha goes into labor and is helped by Siggy. After receiving Ragnar's "message," King Ælle keeps his word and pays him his money. Ragnar and his men leave. King Ælle swears that one day he'll avenge himself on Ragnar. 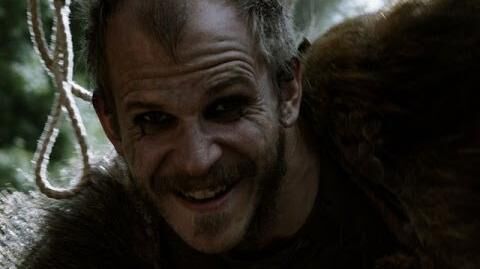 Retrieved from "https://vikings.fandom.com/wiki/A_King%27s_Ransom?oldid=48613"
Community content is available under CC-BY-SA unless otherwise noted.