View source
watch 01:44
'Vikings' Lore: Aethelred
Do you like this video?
Play Sound

Prince Æthelred of Wessex (Old English: Æthel-ræd; meaning "noble counsel") is the son of Judith and Aethelwulf, and half-brother of Alfred.

After the Battle of Repton, Æthelred and his family flees Winchester.

Æthelred, Athelwilf, Alfred, and Judith are in exile in the marshes, Alfred is sick. He has a vision in which Athelstan tells him the Vikings are in York, so Æthelred, Alfred, and Aethelwulf go there with their remaining soldiers to join forces with Bishop Heahmund. The Saxons, led by King Aethelwulf and Bishop Heahmund, attack York, but are led into a trap. Æthelred is wounded in the battle and the Saxons are forced to retreat by the Vikings. Ubbe and Hvitserk arrive at their camp to propose peace, Aethelwulf seemingly accepts their offer, but Heahmund arranges to have the brothers humiliated. The Saxons are joined by Judith's cousin Mannel and his men from Northumbria. Heahmund persuades Aethelwulf to lay siege, and attack only when the Vikings are starving. The Saxons kill the Vikings' hunting parties and blocked the city. They see the smoke from the fires and enter the apparently deserted city. The Saxon celebrations are cut short when Vikings appear from the sewers and engage in battle. Heahmund is surrounded, but spared by Ivar, and captured. The Vikings retake and garrison the city as the Saxons retreat. The Saxons have retreated to Winchester, Æthelred is traid by his father who tells him he will become a great ruler. Alfred collapses during mass, when he recovers he decides to make a pilgrimage to Lindisfarne.

After the death of his father, Judith tells Æthelred he must renounce to the crown, as Alfred was the better choice and it was his grandfather's King Ecbert's wish, although initially angry he renounces to the crown and Alfred becomes king. Æthelred is made the leader of the army after Alfred takes the throne.

Although Æthelred loves his stepbrother he still resents him and plots against him, but ultimately refuses to kill him. Judith however finds out and tells Alfred, he is forgiven by Alfred as he had saved his life during war, but not by Judith. He accuses Judith, not without merit, that she's always wanted Alfred to be on the throne, even though he's first in line for it.

After Alfred becomes sick again Judith distrusts Æthelred even more, Æthelred wishes his brother to recover soon but is poisoned by an unstable Judith. As he's dying from the poison, he looks at Judith and asks her, "What kind of mother are you?" Æthelred collapses and Judith weeps with his dead body in her arms.

Æthelred is based on Æthelred I, King of Wessex. He ruled from 865 AD until his death in 871 AD. He was the fourth of five sons of King Æthelwulf. Æthelred's accession to the throne coincided with the arrival of the Viking Great Heathen Army. In early January 871, Æthelred was defeated at the Battle of Reading. Four days later he won the Battle of Ashdown, but was defeated at Basing and Meretun. He died in April 871 AD. His brother Alfred became king upon his death because Æthelred's sons were infants. Æthelred strengthened the alliance between Wessex and Mercia by adopting the Mercian Lunettes design on the Wessex coinage, creating a unified coinage design for southern England for the first time. The common design foreshadowed the unification of England over the next sixty years and the reform coinage of King Edgar I a century later. 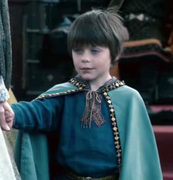 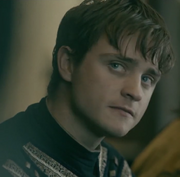