View source
watch 01:44
Who is Aethelwulf?
Do you like this video?
Play Sound

This article is about King Ecbert's son. You may be looking for King Aelle's brother.

Æthelwulf and a group of soldiers arrive, and he invites Ragnar to speak with his father. As a sign of goodwill, Æthelwulf returns Athelstan's bracelet to confirm that the monk is still alive. Despite Ragnar's promise of safety, Æthelwulf's group is ambushed by Northmen led by Erlendur. The entire group is slaughtered except for Æthelwulf who is allowed to escape.

Prince Æthelwulf searches for the young brother of Princess Kwenthrith, Prince Burgred, with his army. He captures a soldier who tells him they expect reinforcements.

Æthelwulf attempts to befriend Rollo and Floki, but it doesn't go particularly well. Later, Æthelwulf learns that Judith is pregnant with Athelstan's child. Then he is sent to the Danish settlement to resolve problems there. Æthelwulf leads his soldiers to the settlement, and kills all the settlers.

Æthelwulf continues to prove his warrior credentials, despite being heir to the throne. Upon hearing Mercia has rebelled itself against Wessex, he goes there on a diplomatic mission against Queen Kwenthrith, who has a knack for butchering diplomats for no reason. When he arrives there, he he bypasses her defenses by sheer force of character and is the first male to withstand her sexual seduction.

Kwenthrith then reveals her plan to use her son by Ragnar to threaten Ecbert. Æthelwulf proceeds to verbally destroy her. He tells her, “Queen Kwenthrith, you would be unwise to kill us. It would give my father the very pretext he needs, a pretext to invade Mercia and become its King. He may have even been prepared to sacrifice me to attain his ends. So if you value your life and that of your son, then I suggest you sign the documents we have brought with us, reaffirming the fact that Mercia is a vassal state of Wessex, and must in future pay not only homage, but also TAXES TO WESSEX, FOR THE PRIVILEGE!” Kwenthrith sinks back on her throne, defeated.

Years later, Æthelwulf finds Ragnar's black raven banner on the beach, and alerts King Ecbert, who reassures him that Ragnar is simply one man. Æthelwulf seizes Ragnar and Ivar. Ecbert arrives and promises no harm will come to Ivar, then introduces Ragnar to Magnus. Ragnar states he and Kwenthrith never had sex and Æthelwulf exiles Magnus.

Æthelwulf gathers a large army in Wessex and moves to intercept the advancing Vikings in Repton. Æthelwulf decides to move his forces toward the Vikings' ships, but the Vikings ambush them in a tight valley. In panic and frustration, Æthelwulf orders a charge. The Saxons charge into the Norse shieldwall, and suffer heavy losses. Æthelwulf orders a retreat, and flees to Winchester to ready its evacuation. Ecbert refuses to leave, and cedes the crown of Wessex to his son. The Bishop Edmund refuses to abandon Ecbert.

Æthelwulf and Judith are in exile with princes Aethelred and Alfred, when the latter is struck by sickness. Prince Alfred has a vision in which Athelstan tells him the Vikings are in York, so King Æthelwulf goes there with his remaining troops and joins forces with Bishop Heahmund.

The Saxons, led by King Æthelwulf and Bishop Heahmund, attack York, but are led into a trap. Aethelred is wounded and the Saxons are forced to retreat. Ubbe and Hvitserk propose a peace, but Ivar wants to continue the war. Æthelwulf seemingly accepts their offer, but Heahmund arranges to have the brothers humiliated.

The Saxons are joined by Judith's cousin Mannel and his men from Northumbria. Heahmund persuades Æthelwulf to lay siege, and attack only when the Vikings are starving. They massacre their hunting parties and blocked the city. Æthelwulf and Heahmund see the smoke from the fires and enter the apparently deserted city. Saxon celebrations are cut short when Vikings appear from the sewers and engage in battle. Heahmund is surrounded, but spared by Ivar, and captured. The Vikings retake and garrison the city, as the Saxons retreat.

A few months later, the remnants of the Saxon Army head back to Winchester to take their quarters. Æthelwulf summons the witan to discuss the Viking threat, stating that Scotland and Ireland have been the prey of Danish invaders and that Danish forces have taken their winter quarters in parts of different English realms. He refers to the Vikings as "stinging hornets" repeatedly. Later, while reading in a book that his father King Ecbert had ordered, he is stung by a bee. He chuckles at the irony, however, soon it is revealed that he is highly allergic to bees, resulting in his death. On his deathbed the dying King tells his sons to "listen to their mother." After Æthelwulf passes there is a discussion between Judith and her sons about the line of succession. Judith convinces her son Aethelred to renounce the throne in favor of his half brother Alfred, whom she states, "has many gifts that Aethelred doesn't have," due to his grandfather's training, making him the perfect fit to rule England.

Æthelwulf is doggedly determined to be a good man, a stalwart Christian, a dutiful son, a strong warrior, and live up to the expectations placed on him since his birth. Unfortunately for Æthelwulf, he lacks the political acumen and keen intelligence of his father. He is a fine warrior on the battlefield, not a particularly bad ruler of Wessex, and his loyalty and commitment to his family and kingdom is admirable. But he constantly finds himself being outmatched by everyone around him in some way, including by Ragnar, Athelstan, Ivar, and his father. Æthelwulf is prone to gnomic, sarcastic, sometimes bitter, and occasionally whimsical asides. He seems to enjoy sarcastically teasing Athelstan. Despite knowing that Alfred isn’t his biological son, Æthelwulf is still a good and caring father to him. Perhaps he doesn’t wish for Alfred to have the same childhood and relationship with his father as he did. When Alfred is older, he tells Æthelwulf that he’s proud to have a father like him. Æthelwulf is very antagonistic towards the Northmen, viewing them as unruly savages who worship a false god. Despite this, he’s still willing to cooperate with them, albeit a bit grudgingly. For example, he isn’t particularly enthusiastic about working with Ragnar to win back Kwenthrith’s throne, but he manages it.

Æthelwulf has a penchant for cruelty sometimes. A striking example of this is when he leads the massacre of the Danish settlement. He slaughters innocent men, women, and children. He even goes out of his way to have an archer shoot down a fleeing boy who couldn’t have been more than six years old. At the end of the massacre, Æthelwulf declares he did it all for the Lord Jesus Christ, then kneels and prays. Another time, Æthelwulf suggests sending Athelstan as an emissary with the Vikings, as he believes the Norsemen wouldn’t kill him. Æthelwulf makes it clear however, that he wouldn’t really care if they did.

Æthelwulf is a fierce warrior-prince, and later king, who fights as a frontline general. But when he is the one in charge, his soldiers often leave the battlefield by the cartload. Every time he has held a top-level command against a comparable force, he has always been routed and easily defeated. More specifically, without the benefit of his father’s tactical acumen, Æthelwulf has been repeatedly upstaged by Ivar, who is a teenager. A lot of his reign as king is spent being outsmarted and outwitted by Ivar. Æthelwulf also consistently has his authority undermined and threatened by Bishop Heahmund, who believes he isn’t effective enough as a ruler. Even in death, his successor Alfred the Great goes on to be far more influential, efficient, and a much bigger name than he ever was able to be.

Æthelwulf has a strained relationship with his father King Ecbert. In the episode Revenge, Æthelwulf stands up to his father for the first time when he directly states that the Great Heathen Army has come for them because of Ecbert’s actions. He also finally calls out his father on his treatment of him, pointing out that Ecbert has manipulated and humiliated him all his life, forced him to adopt the son his wife had during an affair, and outright asks if Ecbert even loves him. Ecbert is unable to say he loves him. Ecbert clearly views his son as unremarkable in every way, especially when compared with the other men around him such as Ragnar and Athelstan. It was clear to Ecbert that his son lacked the intellect, strategic planning, and cunning that he had in spades. If there is a choice to be made betweenÆthelwulf and literally anyone else, Ecbert will choose the person that is not Æthelwulf. This becomes especially notable because Æthelwulf is Ecbert’s only son. Æthelwulf clearly wants his father’s love and respect and feels that he has neither. It gets to the point where Ecbert begins using his approval to manipulate Æthelwulf. One of the most painful parts of their relationship is the fact that Ecbert fawns over Alfred and seemly expects Æthelwulf to accept the boy as his own, even in the face of Judith's lack of remorse for her affair.

Æthelwulf and his wife Judith have a complex and fraught relationship. Their marriage is an arranged one for political purposes. Although he appears to treat her kindly, if a bit awkwardly, as first, it is clear that Judith feels trapped and considered Æthelwulf to be something of a dullard. She becomes fascinated with Athelstan and has an affair with him that leads to an illegitimate child by him. Judith clearly lacks any feelings of remorse about her affair. Æthelwulf tries to violently repress his feelings of jealousy and rage through self-flagellation. He further tries to remain outwardly calm and upstanding in the face of his public humiliation. Judith and Æthelwulf's relationship continues to decay, and their public interactions become colder and more stilted. In private, Æthelwulf repeatedly loses control over his emotions and has vicious outbursts. She eventually tells him that they are married in name only. Judith allies herself with Ecbert and beings an affair with him, with Æthelwulf begins an affair with Kwenthrith. Upon the death of Ecbert, and towards the end of his life, Judith and Æthelwulf do seem to heal their relationship to the point where they are friendly with one another. Judith appears to express real grief at his death.

The real Æthelwulf would conquer the Kingdom fo Kent on behalf of his father, who would grant him the kingship over the country, beginning a tradition by West Saxon kings to make their heirs King of Kent in preparation for their future rule over the whole realm of Wessex. During his reign as King of Wessex, Æthelwulf would go on a pilgrimage to Rome with his youngest son Alfred. Historians living centuries later would claim that during their visit, the Pope would invest Alfred as the future King of Wessex, though in reality the then seven-year-old Alfred was merely made an honorary consuls by Pope Leo IV. Historically, Judith was Æthelwulf's second wife, his first wife was a West Saxon noblewoman named Osburh. According to The Life of King Alfred by Bishop Asser, Osburh was the mother of all of Æthelwulf's children. The marriage of Æthelwulf and Judith took place in 858 AD, nineteen years into Æthelwulf's reign, fifty-eight years later than depicted in the series. Historically, Æthelwulf was succeeded by four of his sons successively. His youngest son became Alfred the Great.

Aethelwulf and Judith being married.

Aethelwulf and his father, King Ecbert.

Aethelwulf protects Kwenthrith and Magnus during the escape from Mercia. 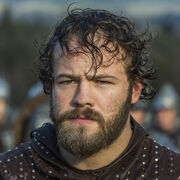 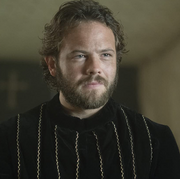 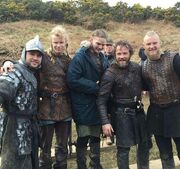 Aethelwulf and Ecbert in Kill the Queen