View source
watch 01:01
Who is Alfred?
Do you like this video?
Play Sound

King Alfred of Wessex and Mercia (Old English meaning "elf counsel") is the illegitimate son of Judith and Athelstan. He was protected by the late King Ecbert, who claims that God has very special plans for him. He is also seen as having a great destiny by his stepfather, King Aethelwulf.

Shortly after Alfred's birth, he is taken by King Ecbert's noblemen and Judith is brought before the court on trial for adultery. Her ear is removed, and she reveals that the father of her child is Athelstan. King Ecbert then stops the trial and pardons Judith, stating that Athelstan was a holy man and his son was chosen by God. Athelstan had been loved by Judith and Ecbert. Alfred is raised by Judith in Ecbert's villa. He is clearly the favorite of Judith and Ecbert, despite not being Judith's first-born. When Prince Aethelwulf returns from fighting in Mercia, Ecbert forces him to accept Alfred as his legal son.

King Ecbert announces that his son Prince Aethelwulf will take Alfred on a pilgrimage to Rome to meet Pope Leo IV. Aethelwulf reluctantly agrees. They, along with the monk Prudentius, depart on their journey. Once in Rome, Alfred is greeted personally by Pope Leo IV, who considers him the future of Wessex and England. Later he takes part in a holy crowning ceremony, where he is gifted with an exquisite sword and made a Consul of Rome.

Ten years have passed, and Alfred has been growing up to be a shy and knowledgable young man. Ragnar Lothbrok has arrived once more in Wessex, only this time he is only accompanied by his son Ivar. While held prisoner in Ecbert's villa, Judith presents Alfred to Ragnar and introduces him as Athelstan's son. Ragnar, who loved Athelstan very much, hugs him and Alfred hugs him back. Ragnar then thanks Judith for introducing her son to him. While Ragnar and Ivar continue to stay at Ecbert's villa, Alfred plays chess with Ivar. Alfred is the first person who has treated Ivar like he wasn't a cripple, besides his family. Alfred is present when Ragnar is being taken to King Aelle for his execution. Before leaving, Ragnar gives him the cross that belonged to Athelstan, and Alfred says that he is going to miss him. The two hug. Alfred also gives Ivar one of the black chess pieces before Ivar is taken to a ship to return to Kattegat.

When the Great Heathen Army arrives in England to exact its revenge for the death of Ragnar, Alfred flees with his family into the marshes, where they live in exile.

Alfred, his family, and the surviving soldiers and people of Winchester having been living in the marshes in exile. Alfred becomes struck by a mysterious sickness that causes him to lose consciousness. While suffering from this illness, Alfred has a vision in which Athelstan tells him the Vikings are in York. Alfred then regains consciousness and tells his mother and Aethelwulf about his vision. Aethelwulf, now King of Wessex and Mercia, takes the remaining army and goes to join forces with Bishop Heahmund against the Vikings.

After the Battle of Yorktown, Ubbe and Hvitserk come to the Saxon camp to propose peace. Alfred and Aethelwulf want to accept their offer, but Bishop Heahmund goes behind King Aethelwulf's back and has the brothers humiliated and beaten up, ending any chance at peace. Then the Saxon Army is joined by Judith's cousin Mannel and his men from Northumbria. Bishop Heahmund persuades King Aethelwulf to lay siege to York, and only attack once the Vikings are weak and starving. Eventually, the Saxons believe they have successfully forced the Vikings to retreat to their boats. They enter the apparently deserted city. Upon entering the cathedral, Bishop Heahmund wonders why the rats are above ground. He grows increasingly suspicious, but the soldiers begin celebrating, believing they have reclaimed the city. Their celebration is cut short when the Vikings appear from the underground tunnels and sewers.

The Vikings and the Saxons engage in battle once more. Alfred demonstrates his might as a soldier against a Viking Berserker. The man wields a large Warhammer and picks through the Saxons. He sees Alfred and decides to take him out next. Alfred is driven back but manages to survive. Mannel sees his nephew is in trouble and comes to his rescue by running his sword through the Berserker. The Viking turns to fight Mannel, with Mannel’s sword still driven into his stomach and out his back! Alfred impales him with his own sword, which seemingly takes him out. But the Berserker gets on his feet, follows them, and uses the last of his strength to bash Mannel’s head in. Said swords still attached. Alfred escapes the city with his brother Aethelred, their father, and their surviving soldiers. The survivors of the Second Battle of Yorktown retreat to Winchester.

Once back in Winchester, Alfred comes to Ecbert's grave and swears to pursue the former king's vision of uniting the kingdoms of England and driving out the Vikings. Later, Alfred's mysterious illness returns and he collapses during mass. Upon his recovery, Alfred tells Judith that he has decided to make a pilgrimage to Lindisfarne. When he reaches the monastery there, he asks the monk in charge about Athelstan, but he is unable to provide much information. Alfred suggests that the monks translate the Bible to English, because many of the people don't understand Latin. The monk is shocked by the suggestion. Later, while praying, Alfred hears Athelstan's voice praying with him.

King Aethelwulf dies from a bee sting. Judith convinces Aethelred that he must refuse the throne because Alfred was crowned by the Pope and has gifts and abilities that Aethelred doesn't. Reluctantly, Aethelred agrees to his mother's plan. Aethelred is offered the throne and declines, saying that they must choose someone else. Alfred is nominated by Judith, but the crowd disagrees. Aethelred steps forward and puts his support behind Alfred. The crowd is calmed and Alfred is crowned king.

A couple of months after Alfred's accession to the throne, resentment has grown amongst some of the nobles. Many of the nobles and clergymen are dissatisfied with Alfred's decisions to appoint bishops himself and to have the Bible translated into English. They also wonder if someone who gets seriously sick on a regular basis can rule effectively. These nobles begin to view Alfred as a threat to Wessex and more importantly, their own positions of power. They plan to murder Alfred and have Aethelred crowned as king. Originally willing to be part of the conspiracy, Aethelred proves incapable of killing his own brother in cold blood. As the West Saxon Army prepares to move out to face King Harald's army, who has arrived to plunder Wessex, Lord Cyneheard is arrested by King Alfred on the charge of conspiracy. Under torture by Judith, Lord Cyneheard reveals that Aethelred was one of the conspiracy's leaders. Judith eventually succumbs to paranoia and poisons Aethelred, even though Alfred had forgiven him.

King Alfred's crown comes under threat multiple times. In order to protect his reign, he marries Elsewith at Judith's suggestion. When Ubbe, Bjorn, Lagertha, Torvi, and Bishop Heahmund return from Kattegat following their defeat in the Kattegat Civil War, Alfred agrees to give them refuge in Wessex in exchange for them fighting against any Viking invaders. Alfred also agrees to eventually fulfill the promise Ecbert had made to them of granting them lands in East Anglia. In order to legitimize their new alliance in the eyes of the West Saxon nobles and clergymen, King Alfred asks them to be baptized as Christians. Torvi and Ubbe volunteer. Ubbe soon becomes Alfred's trust military adviser and close friend, teaching him how to improve his fighting skills and strengthen his battle strategies. Ubbe urges Alfred to be at the head of his armies instead of the traditional place in the back. Thanks to Ubbe's guidance, Alfred leads his army to victory in the Battle of Marton.

Alfred is shown to be somewhat shy, as he runs away and hides at King Ecbert's court when in front of a large crowd of people. He is also quite knowledgeable in biblical stories, as he is able to answer Pope Leo's questions on Jesus' crucifixion, despite his young age. He also excels at boardgames, having defeated Ivar at chess. Alfred is generally understated and idealistic. Like Ecbert, Alfred lacks fear of the Northmen, not at all finding it strange when Ragnar hugs him when first meeting him. Alfred adores his parents, although he does tend to stifle a little under what he sees as Aethelwulf's inability to change and Judith's need to control things behind the scenes after he becomes king. Alfred shows nothing but respect and kindness to others until they behave in a way that makes him change his attitude towards them.

Ivar has an odd friendship with Alfred, who shows him nothing but compassion and acceptance during his time in Wessex. Just like their fathers before them, one would not expect a Viking and a Christian to get along so well, but the pair are seen happily playing chess together. When Ivar departs for home, Alfred gives him a black chess piece as a token of their friendship, something Ivar is obviously touched by.

Alfred is based on the historical ruler, Alfred the Great, who reigned from 871 to 899 AD. Unlike in the series, the real Alfred was the biological and youngest son of King Aethelwulf. After ascending the throne, Alfred spent several years fighting Viking invasions. He won a decisive victory in the Battle of Edington in 878 AD and made an agreement with the Vikings, creating what was known as the Danelaw in northern England. Details of his life are described in a work by 9th-century Welsh scholar and bishop Asser. Alfred had a reputation as a learned and merciful man of a gracious and level-headed nature who encouraged education, proposing that primary education be conducted in Old English instead of Latin. He also improved the legal system, military structure, and his people's quality of life. These improvements included re-founding the city of London following the Norse invasions, instituting military reforms inclusive of localized defensive centers, creating a standing navy, and ensuring major literary works were translated from Latin into Old English.

The historical Alfred the Great did indeed have a chronic illness. In the series his illness is never confirmed. In reality, it is believed that Alfred possibly had Crohn's disease, ulcerative colitis, or hemorrhoids. The real life Alfred was noted to be a very studious boy, though as a younger brother was unlikely to be king. He may have ended up in the clergy, or have been a senior thegn (or noble) to his elder brothers once they were kings. However, many younger sons or children eventually became kings in succession to their siblings in this period, as they were trusted military assistants and counsels and thus had the skills and know-how to rule. Alfred's own children, King Edward the Elder and Lady Athelflead, succeeded each other in reconquering Norse areas of England. Alfred's grandchildren, Kings Athelstan, Edmund, and Eadred all were successors of a united England. Whilst never King of England in the strict sense, he is the only sovereign in the lineage of English monarchs to have the epithet "the Great." The first King of England is recognized to be King Athelstan (r. 927-939), Alfred the Great's grandson, who in 927 AD united the reconquered Danelaw areas, Wessex, and Norse York/Northumbria into a singular Kingdom of the English. 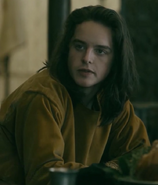 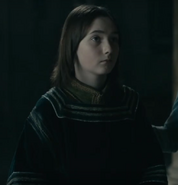 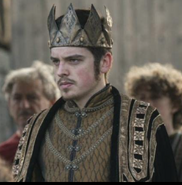 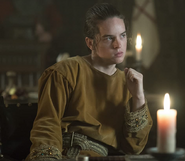 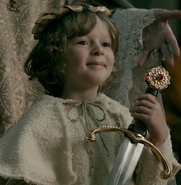