At the behest of King Horik, Ragnar assembles a small party to travel to Gotaland to resolve a land dispute with the area’s leader, Jarl Borg. Ragnar’s renown precedes him and Jarl Borg is intrigued – has he found a new ally or is Ragnar just a puppet of the king? Meanwhile in Kattegat, with a plague taking its toll on the village, the people look to Lagertha to help appease the gods.

Ragnar and his men arrive at Borg's. Borg tells them that it's his land and that's all he has to say in the matter. Ragnar says that King Horik wants peace and maybe they can come to some sort of agreement. Borg asks what his name is and Ragnar tells him who he is. Borg tells his men to give them new clothes and feed them and that tomorrow Ragnar and he will talk again. Gyda tells Lagertha that she hasn't eaten in three days. Lagertha says that she's fearful and Siggy tells her to go see the Seer. Lagertha says that sometimes it's not good to know their own fate. Ragnar tells Borg that King Horik is willing to pay him to renounce his claim to the land. Borg tells him that the land is priceless. Borg says that at the moment his price is King Horik's head. Ragnar says that then he'll be going. Borg says that there must be some other way. He suggests his claim be acknowledged and he leases the land back to the King or they could share the mineral rights. Ragnar says that he wasn't given the authority to negotiate. Borg says that why doesn't he send a messenger to Horik to get his permission. Ragnar agrees to this. Floki is sent back to King Horik.

Lagertha goes to visit the Seer. She tells him that she's been having strange dreams. Lagertha asks what they want and the Seer says that they want to take something from her. The Seer tells her that her husband is in danger but won't tell her from what. Borg asks how Rollo gets on with his brother. Rollo says that they get on well. Borg tells him that he had a brother once but his brother poisoned his wife. He blinded him with his own hands and then burned him alive. Rollo says that Ragnar would never do something like that. Borg says that that's because he's a great warrior. Rollo says so is he but Borg says he's never heard of him. Ragnar must apologize to a woman who two of his men saw bathing. He invites the woman to come to their camp to join them.

Lagertha tells Siggy that it's true that Ragnar is in danger. That she thinks he's in danger of himself. The woman, Aslaug, comes to their camp and Ragnar invites her to join them on their journey to the ash tree. Siggy tells Lagertha about a fever that her cousin's son caught. How one minute he was fine and the next her cousin was burying him in the ground. Siggy passes out on her way to see Thyri. Lagertha tries to take care of her but Siggy tells her to look after her daughter. Athelstan is taking care of Thyri. Bjorn is upset because he believes Ragnar is making a fool of himself by talking with Aslaug. Rollo tells Borg that he always talks about Ragnar. Borg says that that's because Ragnar is his earl. Borg tries to bribe him with women but Rollo says he doesn't have to. Borg asks him what he really wants.

Floki tells Horik that Borg won't sell but that he wants to make a deal. Horik says that he isn't interested in deals. Lagertha takes care of the sick people, including Gyda who tells Lagertha that she is going to die. Lagertha tells her that she's wrong. Aslaug reveals to Ragnar that she's a princess and that both of her parents are dead now. Ragnar kisses Aslaug. Later, Bjorn wakes up and sees Ragnar having sex with Aslaug. Bjorn confronts Ragnar the next day and tells him that he hates him. Bjorn makes him swear to him that it won't happen again. Ragnar does as he's asked. Siggy cries out after discovering that Thyri has died. Lagertha has the dead bodies burned. Aslaug visits Ragnar in the middle of the night but Ragnar tells her no. Lagertha makes a sacrifice in the middle of the night. Athelstan wakes up the next day and discovers that Gyda has died.

Aslaug tells Ragnar that she's carrying his child. Floki returns to Borg's. He tells them that King Horik said that he will make no compromises and no deals. That Borg must name his price. Borg tells Ragnar that his men must leave in the morning. Unless Ragnar wants to renounce his allegiance to King Horik. Ragnar doesn't say anything. Gyda is burned on a pyre. Borg tells Rollo that he must attack King Horik. He knows that Ragnar won't support him but Rollo will. Bjorn wakes up in the middle of the night to find a raven on the roof. Ragnar goes to Aslaug's room in the middle of the night. Lagertha stands by the pyres long after everyone's left. Rollo accepts Borg's offer to fight with him against his brother. 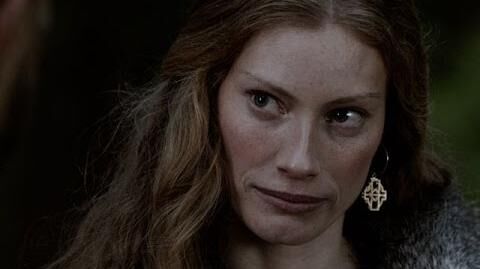 Retrieved from "https://vikings.fandom.com/wiki/All_Change?oldid=48541"
Community content is available under CC-BY-SA unless otherwise noted.