The Most Terrible Thing

Aud Kjetillsdottir (Old Norse: Auðr djúpúðga Ketilsdóttir), also known as Aud the Deep-Minded, was the daughter of Kjetill "Flatnose." She accompanies her family on Floki's journey to settle in new lands.

Aud is gentle. Of the Icelanders, she is the most gentle and pure and tries her best to keep the feuding community together. She becomes like a daughter to Floki. She is the priestess of Thor but doesn't seem to have any actual abilities. She makes a long point about how women are wiser, which seems to convince her father. She does not take it well when she finds out what kind of man her father is. When Aud finds out what her father and brother have done, she commits suicide by jumping into the Gullfoss.

Aud is based on the historical figure Aud the Deep-Minded, also known as Unn and Aud Ketilsdatter, a 9th century settler during the age of Settlement of Iceland. Aud was the second daughter of Ketill Flatnose and married Olaf the White, son of King Ingjald who conquered the shire of Dublin. Later in her life she captained a ship she built while in Scotland and sailed to Iceland. She was known as a respected, capable, independent, and strong-willed woman. Unlike most early Icelandic settlers, Aud was a baptized Christian and is commonly credited with bringing Christianity to Iceland. She figures in several Norse sagas, including Landnámabók, Njáls saga, Laxdæla saga, Eyrbyggja saga, Eiríks saga rauða and Grettis saga. 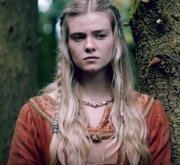 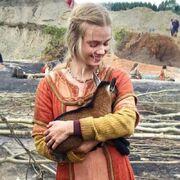 Behind the scenes photo 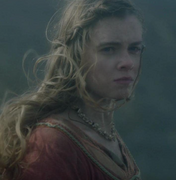 Aud right before she commits suicide