3
Egil "the Bastard" was a Viking warrior and son of an earl. He is an agent of King Harald.

Egil was a warrior from Norway, who had joined Bjorn Ironside's raid to the Mediterranean Sea and the city of Algeciras. In the midst of traveling. Halfdan introduces Egil to his brother, King Harald as "the son of an earl." While Egil desired to be an earl one day, he describes himself as a bastard, indicating his father may not legitimately claim him as his son.

Later, Egil reappears when Harald and Halfdan give him instructions to attack Kattegat. After King Harald and Halfdan leave, Egil launches the attack on Kattegat. He first uses a decoy in the center of the city to see how weak the defenses are. Soon after, Egil attacks Kattegat by using the boats and men he got from King Harald. But Lagertha foils his plan. Whereas his men fled, Egil charges Lagertha only to be struck by Astrid's spear, she prepares to finish him but Lagertha has others plans for him. Lagertha tortures Egil to find out who gave him the men and boats. Egil tells Lagertha he will die anyways so there is no reason for him to tell her. After she shows him his captured wife, he tells Lagertha he will tell her for the sake of her life that he has been sent by King Harald.

He died off-screen because of his wounds or because he was executed. 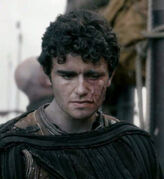 Egil leading the men to the Great Hall.

Egil gets hit by Astrid's spear.

Egil getting tortured by Lagertha. 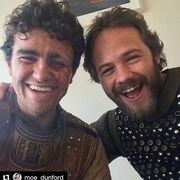 Behind the scenes photo with Moe Dunford