Floki is a boat builder and incorrigible trickster, who also happens to be Ragnar Lothbrok's eccentric and closest friend. Committed to helping Ragnar sail west, he secretly designs and builds a new generation of Viking longboats for their voyage across the ocean westward. He is also the spouse of the late Helga, the father of the late Angrboda and adoptive father of the late Tanaruz.

Floki typifies a neurotic person with a highly balanced personality. Possessing reasonable fear, and vast intellect, he is able to easily build ships with special traits to them and wisely does not hold himself as immune as Ragnar does. Instead, he forever keeps himself a student of the world around him, and is always at attention, like he should be. His tendency to have bad nerves and react with anger over insecurity about his prowess as a fighter and his status among other Vikings, however, prevent from winning greater confidence of Ragnar to better guide him. In Viking society, being so old and unfortunate, knowledge is second to battle-madness in a man, and is only purposed for battle, and the virtues of knowledge going hand in hand with being brave and ferocious granted by Odin were muted by politicians and other arrogant, showy men.

In the episode Rites of Passage, we are first introduced to Floki when Ragnar brings his son Bjorn to visit him. Ragnar described Floki as shy, but he then jumps out in front of Bjorn wearing a mask in an attempt to frighten him. Ragnar told Floki that he will be making their longship for their travels to the west. Floki presents the result: a new kind of ship which allows for travel on the open sea and up rivers. Floki remains nervous about whatever his new design will work. However, as he, Ragnar and Rollo take it for a virgin-journey, he is overjoyed to find it working perfectly.

In the episode Wrath of the Northmen, Ragnar's crew gather at Floki's shipyard where they wash and set out on their journey. At the North Sea, a terrible storm rages. Floki takes it as Thor proving the quality of Floki's ship. After the raid, Floki sets fire to the scriptures of the Lindisfarne monastery. The fire spread and destroyed most of the monastery.

In the episode Raid, Ragnar and his family seek shelter at Floki's shipyard where they first meet his lover Helga. Floki uses his skills in healing to save Ragnar's life.

In the episode Sacrifice, when it is announced that they need a new human sacrifice for the gods to take the place of Athelstan, Floki seems to momentarily consider offering himself for the honor, but Helga pulls him back.

In the episode All Change, Floki joins Ragnar on his journey to Götaland to negotiate with Jarl Borg. Floki remarks he is bad at treating his guests. Later, Ragnar sends him to King Horik to further the terms Ragnar has managed to make with Borg. King Horik and Floki bonds over their deep interest in Norse Mythology. Floki quip that Loki is his distant ancestor. Horik ultimately rejects Borg's terms. Floki concludes this can only mean war.

Floki is still as loyal as ever to Ragnar. Floki is among the warriors Rollo injures severely during his betrayal in the battle against Jarl Borg. Floki eventually recovers and continues to build the ships for their continued voyage and raids to England.

Floki finds himself not fully trusting the Christian-turned-pagan Athelstan; while the latter has claimed to have abandoned his Christian beliefs, Floki does not believe him.

Later Floki appears to drift away from Ragnar, feeling Ragnar claims everything. He marries his lover Helga without the blessing of the Earl of Kattegat but with King Horik and his son Erlendur as witnesses. When the Viking fleet leaves Kattegat for Wessex, Floki joins with Horik rather than Ragnar as he thinks the King knows more about the darker gods that haunt him than Ragnar.

It is on the trip to Wessex that King Horik further sinks his talons in Floki, telling him a shipbuilder is just as valuable as ten Earls. The Danish King also tells him he needs Floki's ideas, for these come directly from the gods. In the Viking camp in Wessex, Floki is often seen close to King Horik. Floki even follows the Danish King when he advances towards Anglo-Saxon forces despite Ragnar advising them to wait. When the Norsemen are on the brink of being annihilated, Floki persuades Horik to retreat along with Ragnar, Lagertha and some others, leaving a critically injured Rollo behind.

Arriving at Ecbert's villa, Floki remarks that it is a bad decision to negotiate with the King of Wessex. He adds that Rollo is not worth it after his earlier betrayal. When Lagertha says it is not only about Rollo, Floki replies it is also about Athelstan, someone who they cannot trust. Ragnar finds it peculiar for Floki to talk about trust.

Helga arrives in Kattegat with their newborn child. Floki wants to name her Angrboda, after Loki's first wife. Helga is upset about it, remarking that Angboda was evil and gave Loki monstrous offspring. Floki says she still was a great Giantess. When Helga asks Floki if he will come back with them so he can get to know his daughter, Floki declines, saying he has to stay in Kattegat and urges her to leave.

Floki reminds King Horik a proposition, but Horik replies he is not sure if he can trust Floki. When Floki asks what he can do to gain his trust, Horik tells him to kill someone close to Ragnar. Floki gathers some mushrooms which he personally gives to Rollo, still recovering from his injuries, and also via Ubbe to Torstein. Later, Torstein appears to have died from poisoning. Floki, while comforting a grieving Bjorn, tearfully says they should find the one who murdered their friend and flay him.

King Horik visits Floki at his place, saying he did well and now Ragnar and his family should be killed. Bjorn, whom they think of as possibly protected by the gods, is to be killed as well and Floki, Horik says, should find a way to do it. Floki spies on Bjorn, who pursues his lover Porunn in the woods.

During the night, King Horik secretly gathers his troops to attack Kattegat with the intention of killing Ragnar. When he makes his way to the Earl's Hall, it turns out that Floki has stayed true to Ragnar all along and was only acting as a double agent. Ragnar's loyalists then take turn in stabbing Horik. Floki sarcastically pats the King's face before walking away, leaving him to be finished by Ragnar.

In this season, Floki shows his hatred for Christians and his jealousy for Athelstan by killing him in his own home. When he witnessed Ragnar being baptized and declaring he wanted to set foot in Heaven, where Athelstan was at, all Floki felt was despair and dissappointment.

In the episode Two Journeys, Floki goes with his wife Helga to Normandy.

Floki discovers the volcanic island of Iceland, which he believes to be Asgard. The settlement established by him slowly falls apart, as its inhabitants take revenge on one another, creating a cycle of hatred. In the end Floki travels alone into a cave which he believes to be a gate to Helheim. Inside, instead of the gods he discovers a Christian cross. Laughing and crying at the same time, Floki is buried in the cave as it is revealed to be inside an erupting volcano.

Floki is an eccentric and joyful man with a bizarre and zany air about him and is often the source of entertainment among his friends. Though this is arguably a facade to hide the more serious and emotionally troubled man brooding beneath the surface. Nonetheless, he is sincere in his loyalty to Ragnar and is respected for his sharp intellect and wisdom. So much so that Ragnar trusted him to negotiate peace talks with King Horik on Ragnar's behalf. He is regarded as an equal if nothing less than an individual of particularly high standing among the other warriors of Kattegat. Despite his seemingly nonchalant and apparently strange facade, Floki is very dedicated and proud of his work. He finds joy and often laughs during their plunders, whether he is killing or discovering new things in the land they visit. He is a man who is devoted to his gods and lives to serve them.

However, one very important aspect of Floki's personality is his fierce devotion to the Norse Pantheon. At one point Floki quips that Loki's is his distant ancestor. Floki has shown on many occasions to be remarkably intolerant towards those who do not share his faith; particularly Christians. To him, all Christians are untrustworthy and undeserving of mercy, including Athelstan, whom he often menaces and only seems to tolerate at the behest of Ragnar. In Floki's mind his faith and way of life are on a collision course with Christianity where one is doomed to be destroyed by the other. It is for this reason that he finds the idea of cooperating with the Christians or otherwise participating in their customs, even in an insincere manner such as Rollo's baptism, to be a grave betrayal to the Norse gods. He is prone to viewing many events as having religious or spiritual significance and even sees visions from his gods.

Ironcially, his devotion to his faith didn't stop him from being intrigued by his first contact with Islam during the raid on the town of Algeciras Saracen Spain during the Mediterranean Raid.

Floki's fighting style is unusual but practical. Instead of traditional Viking weapons such as the spear and long ax, Floki prefers a small hatchet and a long knife. Rather than taking a stand in the shield wall or "skjaldborg", where his skinny frame and lack of muscle would put him at a disadvantage in the shoving match, Floki would stand behind his brothers, pull through and savagely butcher any enemy soldier unwary or stupid enough to let himself be caught.

This tactic worked even against larger and stronger opponents as the enemy would be dazed and confused at being ripped through the shield wall and then Floki's speed and use of two weapons will quickly finish the opponent, who is unguarded and encumbered with a heavy shield. All in all, this speaks for his quick thinking and, despite his skinny stature, being a lethal adversary who was not afraid to defy what is "usual" and invent his own ways.

Floki is also a very able and knowledgeable shipwright and carpenter, creating the longship which allows Ragnar to travel west into Britain, which earned him the nickname "Floki the Boatbuilder." Hints of a spiritual ability have been made throughout both seasons. 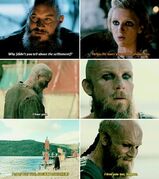 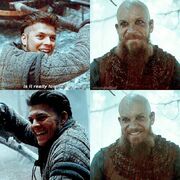 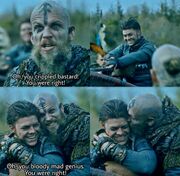 Retrieved from "https://vikings.fandom.com/wiki/Floki?oldid=44580"
Community content is available under CC-BY-SA unless otherwise noted.