View source
watch 02:56
Doctor Strange in The Multiverse o Madness - The Loop
Do you like this video?
Play Sound

11
Freydis is a former slave who was freed by Ivar. Ivar quickly becomes infatuated by her and asked her to be his confidant and later she became his wife.

Freydis is first seen during the Battle of York she is brought to Ivar to be later sacrificed to the Gods, however Freydis lack of fear towards him and apparent submission interests Ivar, he asks her to undress and to kiss him. Freydis willingly obeys and tells Ivar he is special and favored by the Gods despite his disease and whispers in his ear great things await for him. Ivar moved by her words sets her free.

Time after as Ivar celebrates with King Harald his victory over Lagertha in Kattegat he is dumbfounded to see the former slave again amongst the crowd, she smiles to him but walks away. Shortly after Freydis sees Ivar struggling with his pain in his tent, Ivar is visibly happy to see her once more and asks her to come in.

Ivar tells her he had been thinking about her and wants to know if she is now married, Freydis smiles and replies since he set her free she lives alone and freely, with no man in her life. Ivar recalls their meeting in York as Freydis insists he's favored by the Gods which is hard to believe for Ivar after a life of struggle, she reminds him of all he has achieved against all odds. She finally reveals her name to Ivar being Freydis, like goddess Freyja, impressing Ivar even more. Ivar tells Freydis he is in danger of being killed and asks her if he could be honest and trust her more than anyone else in his kingdom, Freydis once again lets Ivar know she would do anything he wants her to, even if it means dying for him.

Ivar announces to his people he will marry Freydis and soon they will all known her as the new Queen of Kattegat, upsetting Hvitserk, Margrethe, and King Harald. Margrethe assures Harald Ivar having a wife won't be a problem for him as he cannot produce children, stating, "He is Boneless" and the three laugh together. Meanwhile Freydis enjoys the celebration with Ivar. After it's over Freydis tells Ivar she wants to have sex with him. In their bedroom the two kiss passionately but Ivar stops her, Freydis insists but is rejected by Ivar again afraid of failing again as he failed with Margrethe once. Freydis grabs a knife and tells him by his blood she will bear him a child, she slices his hand and licks his blood. She tells him his son will love him as much as she loves him and their child will be with him always, in good and bad times. They kiss again. The day after Freydis has sex with one of Ivar's male servants in order to give Ivar a heir, albeit not his biological child.

At night Ivar dreams Freydis tells him she's carrying his child, he sobs and tells her he loves her, as they kiss Freydis grabs a knife and stabs him in the heart but then she becomes Margrethe, Ivar sees himself die in his bed as he hears Margrethe laugh. Ivar wakes up shaken only to see it was a nightmare and Freydis is sleeping besides him.

Ivar the next day tells Harald and Hvitserk Freydis is with child.

Freydis has the biological father of her child killed, and then attends the sacrifice of a false Lagertha, Freydis like Ivar appears to enjoy the sight of death.

Later Ivar decides their child should be named Baldur, after Odin's son.

Months after Freydis is heavily pregnant, Ivar seeing his brother Hvitserk doesn't love him wants him to be killed so no one would dare to go against him, Freydis believes it is a bad idea and asks him if he wouldn't prefer to be loved than feared.

Freydis weeks later gives birth to Baldur, the servant woman tells her she won't be able to breastfeed him, Freydis is eager to hold her child and then an overjoyed Ivar holds his son, only to see the child has been born with a deformity, Freydis says Baldur's deformity is a true sign of the Gods favor like she told him when they first met, shocked and saddened Ivar leaves Baldur to die at night, unknown to Freydis.

When Baldur goes missing Freydis begs Ivar to tell her where is her son, Ivar strikes her and blames her for his deformity as he wanted a healthy son.

Later Freydis informs Ivar hunters have found their child, remains of Baldur whom had been eaten alive by foxes. Freydis asks Ivar if he killed her child, Ivar begins to lose his temper again wondering if Baldur was really his son. Ivar nearly kills Freydis strangling her, but leaves her on the floor causing a rift on their marriage. Freydis is visible upset as Ivar gives a speech and lies about Baldurs death saying he loved his beautiful son but Odin cut his life short, she reluctanctly holds his hand for a brief moment as he finishes his speech.

Ivar asks forgiveness about hurting her and says he loves her. But Freydis fell out love with Ivar and grew to hate him, unable to forgive him for killing Baldur. She turns to helping Bjorn, Harald, and Hvitserk in overthrowing Ivar, and reveals to Hvitserk that Ivar's men burned Thora alive along with many others. Freydis, despite telling Bjorn she wanted Ivar dead stays in Kattegat with Ivar, she confesses her betrayal. Ivar kisses her one last time and strangles her from behind, as she is dying he tells her she's the most beautiful thing that ever happened to him and he will always love her and mourn her when he has time. Bjorn and Hvitserk trying to find Ivar to kill him instead discover her body on the bed next to a box containing Baldur's remains. Bjorn saddened and angry kneels to bid farewell to the former Queen holding her hand for a moment as Hvitserk watches with anger.

After escaping Bjorn, Ivar wanders and ends up in Rus where he meets Prince Oleg they bond over murdering their respective wives. Time after Ivar meets his future wife, Princess Katia who looks identical to Freydis only with dark long hair, Ivar is shocked and later confronts her but she makes it clear she is not who he thinks she is. Ivar still believes she is Freydis. Later Hvitserk reunites with Ivar, after introducing him to Oleg and his wife, in private Ivar asks Hvitserk about Katia claiming she is Freydis, Hvitserk doesn't seem to see any resemblance between the two and tells him he is still crazy.

Freydis, despite initially being a slave, is a brave and confident young woman. This is seen in her complete lack of fear towards Ivar. She is religious, seductive, compassionate, and romantic. Freydis is so beautiful that Ivar initially wants to sacrifice her to the gods to ensure the Vikings' victory over the English. She is wise beyond her years. She's shown to be able to see things in Ivar that very few others do, including his potential for greatness and how he is destined to become a great leader. She claims she always sees these things in people that others dismiss. Her words are similar to what Ragnar tells Ivar in Season 5 about how he is destined to do great things. Freydis is possibly the only one besides Ivar's family who isn't afraid of him. She and Ivar both have a tendency to be crazy, ambitious, manipulative, and cunning.

Yet Freydis is also cunning and vengeful. She helps Bjorn overthrow her husband Ivar for killing her child. 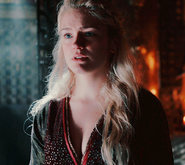 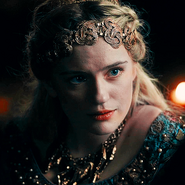 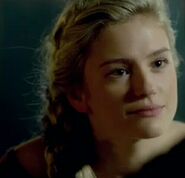 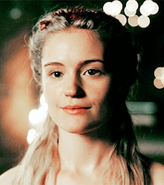