View source
watch 01:08
Who is Gyda?
Do you like this video?
Play Sound

Not to be confused with her namesake, Gyda (Shieldmaiden).

Eye For an Eye

Gyda Ragnarsdottir is the daughter of Ragnar Lothbrok and Lagertha.

Gyda is an eleven-year-old girl who lives on a small farm in a village outside Kattegat with her father Ragnar, her mother Lagertha, and her twelve-year-old brother Björn.

Gyda is hunting eels and fish with her mother in the river near their farm. When Ragnar arrives home after fighting and raiding in the Eastern Baltic, Gyda is ecstatic and jumps into his arms. The family celebrates Ragnar's safe return home.

While Ragnar takes Björn to Kattegat to attend the Thing, Lagertha and Gyda manage the farm. One night, Lagertha is teaching Gyda how to weave on their loom when two drunkards break into their home. Lagertha sends Gyda out to the goats to protect her. Once Gyda is gone, Lagertha quickly kills the men.

As Ragnar and his men prepare for to leave for their first journey west, Lagertha is at home with Björn and Gyda. She tells them the story of Thor and his battle with the eternal serpent Jörmungandr.

Gyda quickly becomes attached to Athelstan upon his arrival at Ragnar's farm.

Gyda joins her family and their friends as they make the pilgrimage to the temple at Uppsala. One night during the pilgrimage, Gyda tells her mother that she has started bleeding. Lagertha replies that this means she is now a woman no longer a child but asks to cradle her once she passes away.

As the plague takes hold, Gyda is a victim and passes away. Though Lagertha outwardly shows little emotion, perhaps feeling the need to be strong for the afflicted community, it's clear her heart is broken as she places Gyda's body on a funeral pyre and burns it.

Sometime later, after an extended absence from the village negotiating and waging war on behalf of King Horik, Ragnar mourns his lost daughter. Heartbroken as he sits alone in the spot where her funeral pyre burned on the shore of the fjord, he speaks to her as if she were physically present. He muses that she was mature for her age and laments that while he knows he can feel jealousy towards his sons, Gyda was his only child that he could feel nothing but love for.

Gyda is kind and gentle. She is quiet and watchful. Gyda is generally sweet and innocent.

Gyda is loosely based on the historical Ragnar's unnamed daughters. 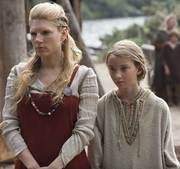 Lagertha and Gyda in Rites of Passage 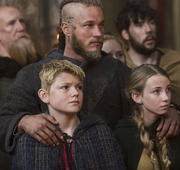 Gyda and Lagertha are fishing in Season 1 Episode 1.