View source
watch 00:57
Who is Heahmund?
Do you like this video?
Play Sound

Bishop Heahmund was a Saxon Bishop of Sherborne and a holy warrior.

Heahmund to be consoling Widow Ordlaf, whose husband Heahmund gave funeral rites to. He immediately begins having vigorous sex with her with his sword and armor in a rack next to the bed. In one moment, he is introduced as a man of God, a womanizer, and a warrior. They have sex for weeks.

Bishop Heahmund and his men arrives at King Ecbert's villa, they find Ecbert's body, they celebrates the late sovereign's funeral, and begins rebuilding the place. King Æthelwulf joins forces with Bishop Heahmund's army. The Saxons, led by King Æthelwulf and Bishop Heahmund, attack York, but are led into a trap. Æthelwulf's son Prince Æthelred is wounded and the Saxons are forced to retreat.

Ubbe and Hvitserk arrive at their camp and propose peace. Æthelwulf seemingly accepts their offer, but Heahmund arranges to have the brothers humiliated and reveals to them he can speak Old Norse. The Saxons are joined by Judith's cousin Mannel and his men from Northumbria. Heahmund persuades Æthelwulf to lay siege to York, and attack only when the Vikings are starving. They massacre the Vikings' hunting parties and block the city. Eventually, Æthelwulf and Heahmund see the smoke from the fires as the Vikings appear to burn the bodies of their dead, and enter the apparently deserted city.

The Saxon celebrations are cut short when Vikings appear from the sewers and engage in battle. The Vikings have surrounded Bishop Heahmund and take out his horse with arrows. Ivar interrupts the fight and commands one of his men to bring Bishop Heahmund his own horse. Heahmund is promptly given Ivar's horse and the fight continues. Ivar does this because he believes Heahmund is too great of a warrior to fight on foot. In the end, the Saxons are once again forced to retreat from the city. Heahmund is captured, but spared by Ivar. Ivar, Hvitserk, and many of their warriors sail for Vestfold, taking Heahmund with them.

Heahmund arrives in Vestfold, and Ivar explains the reason he wants him to fight for him is because he admires him. Heahmund is persuaded by Ivar to fight with him.

Heahmund is present before First Battle for the Kingdom of Kattegat, and witnesses Harold attempting to make his brother Halfdan to join him. He then fights in the battle after Ivar refuses to bow down to Lagertha, where he is struck in the torso, legs, and neck.

Following the outcome of the battle, Ubbe finds a comatose Heahmund and prepares to execute him, but Lagertha lets him live. While being tended to, Lagertha and Heahmund engage in a philosophical conversation. Heahmund then visits Lagertha at night, claiming he wants another discussion. Instead, Lagertha blows out the candles and the two passionately make love. The following morning, Heahmund expresses concern for Lagertha, before the Second Battle for the Kingdom of Kattegat. During the fighting, he mocks a shocked Ivar, and is present when the forces of Kattegat are defeated. Heahmund, Lagertha, Ubbe, Torvi, and Björn travel back to Wessex to escape Ivar.

Afterwards, at Heahmund’s suggestion, Lagertha, Björn, and Ubbe are allowed to settle in East Anglia in return for fighting against other Viking incursions. Heahmund is informed that his bishopric has been given to Lord Cuthred, due to Heahmund being assumed dead. Heahmund begins secretly meeting Lagertha in her chambers and the two have a long periods of sex. Heahmund’s sex with Lagertha causes him to lose focus, and the now-Bishop Cuthred's spies discover Lagertha and Heahmund's affair. When Bishop Cuthred confronts him and threatens to tell King Alfred, Heahmund murders Cuthred. Heahmund has a vision of hell that drives him to renounce Lagertha, who accuses Heahmund of never having loved her.

During the Battle of Marton, against King Harald's forces, Heahmund illustrates himself brilliantly, showing off his exceptional fighting skills by killing dozens of Norse warriors. However, after a brief moment of respite, he is struck by several arrows in the chest and in the back before being finished off by Gunnhild.

Heahmund is a complex character. He possesses a deep faith and love for Christianity, while at the same time a skilled warrior with a love for women and drink. As a man of the cloth Heahmund has received a classical education, and is quite intelligent. Heahmund has assisted King Æthelwulf and later Ivar with their battle plans, showing good strategic thinking. He is extremely ruthless towards pagans. Heahmund is so great a warrior an impressed Ivar decided to give him his horse after the bishop's horse died in battle. He portrays himself as an absolute zealot with no middle ground. The insanity facade cracks a little when he devises a plan to starve the Vikings out of York. He attempts to make it appear as a divine vision, but he's just a very good tactician. In fact, he gets away with a lot, including what amounts to treason, by describing it as "God's will." In his own words, he's a man with a inner struggle and that God is aware about.

He's very proud of his position as Bishop of Sherborne, to the point he believes no one else is worth enough of that privilege. After learning by Alfred that lord Cuthred was appointed as Heahmund's replacement he couldn't accept it and considered this as an insult to him with the excuse that he had no true faith. He's also a clear hipocrite. He confronted Cuthred and killed him with the justification of being a threat for king Alfred and leading a conspiracy against him and also called him a hipocrite, while Heahmund is not better than Cuthred knowing he commits sacrilege by indulging in his carnal desires and sleeping with women while he claims to be a servant of God and executor of his will.

Heahmund's decisions to side with certain people sometimes seems at odds with his actions or words. First, he's with the English, then Ivar, and then Lagertha, and then seems to switch back to the English after he takes Lagertha's forces to England. One possibility is that he's a consummate liar, telling whoever he's siding with what they want to hear to survive longer. This is not unlikely considering how often he's surrounded by pagans or people who really don't seem to like him. While he clearly has his issues, it's hard not to sympathize with him, considering the Vikings have invaded his homeland and are going from town-to-town slaughtering innocent people.

Bishop Heahmund is based on the historical figure Heahmund, the medieval Bishop of Sherborne. He died at the Battle of Meretun, also called the Battle of Merton, between the Saxon army of Wessex and the Danish Great Heathen Army in 871 AD. He is venerated as a saint in the Eastern Orthodox Church and the Roman Catholic Church.[1]

Heahmund pointing his sword to Ivar at York. 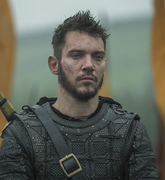