watch 01:43
Who is Judith?
Do you like this video?
Play Sound

What Happens in the Cave

Judith accompanies her parents, King Ælle and Queen Ealhswith, who have accepted an invitation to form an alliance with King Ecbert of Wessex, who seeks help resisting the advances of the invading Vikings. Ælle and Ecbert agreed that each kingdom would send troops to help defend the other, should the Northmen attack again. King Ælle is wary of the agreement because there is nothing to stop Ecbert from taking over his own, smaller kingdom. King Ecbert then suggests that Judith and his son Æthelwulf marry to form a stronger alliance. King Ælle agrees. Throughout these events, Judith and Æthelwulf are merely pawns in their fathers' plans. The two marry shortly thereafter. While not particularly happy about the marriage, they don't seem that displeased with it, as both grew up knowing that they would most likely marry for political reasons and not love.

About a year has passed since Judith and Æthelwulf married, and Judith has given birth to a son, Æthelred. Though a dutiful wife, Judith is much more interested in Athelstan, the monk who accompanies Ragnar Lothbrok on peace negotiations between Ecbert and the Vikings. Judith develops a potentially dangerous crush on Athelstan. She intentionally seeks him out, asking to kiss his hand, saying that she was told that he was crucified and that the marks are still there. A flustered Athelstan does not want to show her his scars or let her kiss him, even if it is just on the hand. Judith grabs his hand anyways and sees the scars. She kisses them before being interrupted by Æthelwulf, who is heading into battle with Ragnar and their men to reclaim Mercia.

Later, Judith finds Athelstan again and asks to confess to him as her regular confessor is not available. Athelstan reluctantly agrees. Judith tells him that she has "sinned in thought but not in deed." She confesses to dreaming of lying naked beside a man who is not her husband. Judith continues, saying that they make love to each other and that she enjoyed it. Athelstan asks who the man in her dream was, and Judith replies that it was him. She leaves before he can give her her penance. The next morning, Athelstan is returning to Lagertha's settlement, and Judith is upset. Athelstan brings up that she did not receive her penance. She replies that him leaving is penance enough. He believes his leaving is a good thing. Ecbert notices Judith's interest and slyly warns her that "an interesting person can also be a dangerous one." Judith says the same can be said about his interest in Lagertha.

Several days later, Lagertha and Athelstan return to the castle to see Ecbert. He takes them to his Roman baths where Judith joins them. Ecbert and Lagertha soon begin kissing, which causes an embarrassed Judith to abruptly leave saying, "It's not right." Athelstan follows her. Judith confesses to Athelstan that she feels dirty because of her growing interest in him even though she knows it is not right. He tells her to go to bed and rest. Athelstan eventually realizes that he returns Judith's feelings, and the two eventually begin having an affair. King Ecbert, it seems, has succeeded in his goal of quietly pushing the two together. Judith discovers that she is pregnant.

Æthelwulf returns from Mercia to find his wife is suffering from morning sickness. Judith does not try to hide her infidelity or the results of it. Æthelwulf is furious to discover that his wife is pregnant by another man and threatens her to reveal who the father is, but Judith refuses. Several months later, the child is born. It is a boy. Æthelwulf comes to Judith claiming to be there to congratulate her on her new child, but violently drags her out of the villa and ties her up outside in front of a jeering crowd. Æthelwulf and Ecbert watch as she is found guilty of adultery and is sentenced to have her ears and nose cut off as punishment. Screaming for mercy, Ecbert offers her the option of avoiding her sentence if she names the father. Judith refuses and her punishment begins with the removal of an ear. Unable to bear the pain, Judith reveals that the father is Athelstan. Æthelwulf does not believe her, but Ecbert does. He says, "Athelstan is a holy man. I cannot blame my daughter-in-law for being attracted to such a man." Judith is released and Ecbert commands the child be baptizes as Alfred.

Not understand why, Judith has regained King Ecbert's favor, who now dotes on Alfred despite his illegitimate parentage. He treats the boy as if he were born of the Virgin Mary herself. Æthelwulf meanwhile, tells his father that his marriage with Judith is fine, but he calls his wife a whore when she brings Alfred to see King Ecbert. Ecbert prompts throws Æthelwulf out of the room and consoles Judith before turning his attention to Alfred. When Æthelwulf is sent on a seemingly suicidal mission to Mercia, Ecbert visits Judith. He shares with her the writings that Athelstan was translating for him. He vows to protect her and her son and kisses her on the lips before leaving. Judith is stunned and confused. When Æthelwulf survives his mission to Mercia and returns to Wessex, Ecbert tells Judith that his protection comes at a price, she must become his mistress. King Ecbert promises her that if she agrees, she will inherit his kingdom over Æthelwulf. Judith agrees.

Æthelwulf sets off the rescue Queen Kwenthrith, who is being held captive with her son in Mercia. He bids a cold farewell to an indifferent Judith. Meanwhile, King Ecbert approaches his daughter-in-law telling her, “I want you to be free.” Judith replies that she wants to illuminate manuscripts, even though the Church does not allow women to do so, and Ecbert says he will find her a teacher. As promised, Ecbert brings Judith a teacher, who is horrified to learn that his new student is a woman. The monk speaks with Bishop Edmund, who informs him that a former prostitute was allowed to wash the limbs of Jesus, thus he can teach this woman.

Judith begins taking lessons from the monk, who knows all about Rollo’s attack on the Viking settlers. Judith inquires about Athelstan, and the monk says he doesn’t know anything. Later, Judith amuses Ecbert with stories of the Paris attack. Ecbert assures her that Althelstan lives, if only through her son and in Judith herself. She laughs it off, saying that she is just a sinful woman. Ecbert insists they are all sinful, ever since being cast out of paradise. That evening, Ecbert comes to Judith’s chambers. She agrees to become his mistress, on the condition that he respects her. That night he dreams of Athelstan and believes it to be a sign that he is dead. Ecbert and Judith mourn the loss of Athelstan. The timing is perfect, as her tears fall exactly when her husband returns. She pretends they are tears of joy at his return.

When King Ælle arrives to discuss the issue of Mercia with Ecbert, he notices a startling thing. Judith’s husband cozies up next to Kwenthrith, while his daughter giggles next to Ecbert. “You are a bad wife and a bad mother,” he tells his daughter. She retorts that no one owns her anymore and she is finally free. When Kwenthrith attempts to kill Ecbert, Judith kills her.

Later that night, Judith refuses to even lie in the same bed as Æthelwulf, who calls her a whore for sleeping with his father. She retorts back that he should go sleep with his mistress instead. Judith seeks out Ecbert, who gives her a ring that belonged to his wife who died in childbirth. Though resolved never to marry again, Ecbert wishes for her to wear it. Later, Æthelwulf tells Ecbert and Judith that Ragnar has returned. Ecbert reassure them, saying that Ragnar is just a man. Judith meets Ragnar again. She no longer considered him an enemy, and introduces him to Alfred as her and Athelstan's son. Ragnar thanks her for the introduction. After Ragnar's death Judith warns her father that he has no idea of the level of revenge of Ragnar's sons and the consequences of his actions. She only receives contempt and mockery from Ælle.

Judith, Æthelwulf, Æthelred, and Alfred are living in exile in the marshes with the remaining army and their court. Alfred falls ill and Judith nurses him until he recovers. Upon their return to Winchester, King Æthelwulf is stung by a bee and is revealed to be deathly allergic. On his deathbed, the dying king tells his sons to "listen to their mother." After Æthelwulf dies, there is a discussion led by Judith with her sons about the line of succession. Judith convinces Æthelred to renounce the throne in favor of his half-brother Alfred. Judith states that Alfred "has many gifts" that Æthelred does not, due to Ecbert's training, making him the perfect fit to rule England. Æthelred reluctantly agrees to his mother's plan.

Upon discovering Æthelred's involvement in the plot to usurp Alfred, Judith cannot forgive him, even though Alfred does. When Alfred grows sick again, Judith grows increasingly unstable, seeing everyone as a threat against him and believing that the people will not submit to being ruled by a sick king and favor Æthelred again. At a dinner with Æthelred, Judith reveals her resentment to him as she watches him die in horror after poisoning his food and drink. Judith weeps while holding her dead son's body.

Later on, Judith comes across a mentally ill Lagertha in the home of a medicine woman. Judith takes Lagertha back to the castle with her in order to nurse her back to health. The two women bond and form a friendship based on the shared experiences of being a wife and mother to powerful men. Judith eventually admits to Lagertha that she has a lump in her breast and that she is dying. She dies in her bed shortly afterwards, surrounded by Alfred, Lagertha, and Elsewith.

Æthelwulf and his wife Judith have a complex and fraught relationship. Their marriage is an arranged one for political purposes. Although he appears to treat her kindly, if a bit awkwardly, as first, it is clear that Judith feels trapped and considered Æthelwulf to be something of a dullard. She becomes fascinated with Athelstan and has an affair with him that leads to an illegitimate child by him. Judith clearly lacks any feelings of remorse about her affair. Æthelwulf tries to violently repress his feelings of jealousy and rage through self-flagellation. He further tries to remain outwardly calm and upstanding in the face of his public humiliation. Judith and Æthelwulf's relationship continues to decay, and their public interactions become colder and more stilted. In private, Æthelwulf repeatedly loses control over his emotions and has vicious outbursts. She eventually tells him that they are married in name only. Judith allies herself with Ecbert and beings an affair with him, with Æthelwulf begins an affair with Kwenthrith. Upon the death of Ecbert, and towards the end of his life, Judith and Æthelwulf do seem to heal their relationship to the point where they are friendly with one another. Judith appears to express real grief at his death.

Judith in Season 5B. 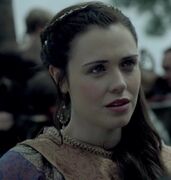 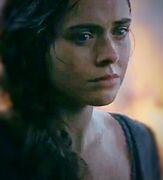 Retrieved from "https://vikings.fandom.com/wiki/Judith?oldid=46398"
Community content is available under CC-BY-SA unless otherwise noted.