View source
watch 01:55
Cobra Kai Season 4 - The Loop
Do you like this video?
Play Sound

Mercenary is the first episode of the third season of Vikings. It is the twentieth episode of the series overall. It first aired on February 19, 2015. It was written by creator Michael Hirst and directed by Ken Girotti.

Ragnar and Lagertha's fleets depart Kattegat once more for Wessex, but this time they bring settlers. King Ecbert hosts the Vikings and proposes a deal. Despite the misgivings of some of the other leaders, Ragnar leads his forces into battle once more, but this time as allies of Wessex.

Visiting The Seer, Lagertha asks if she will ever bear another child. "I cannot see another child, no matter how far I look" is his response. She presses The Seer, wanting to know what he does see. The Seer says, "I see a harvest celebrated in blood, I see a trickster whose weapon cleaves you, I see a city made of marble, and a burning, broiling ocean." Lagertha, frustrated, asks when she'll die. The Seer tells her to come back another day and perhaps he can tell her.

Ragnar and Bjorn sit high atop a slope overlooking Kattegat. Ragnar wants to return to Wessex to claim the land he was promised by King Ecbert. Björn, on the otherhand, wants to fight and raid. "What are you fighting for?" asks Ragnar. "That," says Björn, gesturing to the sprawling city of Kattegat.

"What do you see?" asks Ragnar. "Power - the power of a king," replies Björn. Ragnar warns against the lure of power and its corrupting influence. "It attracts the worst and corrupts the best." Ragnar tells Björn that he never asked for power.

In Hedeby, Lagertha asks Kalf to come with her to Wessex. Kalf declines, saying he wants renown, but someone needs to look after Lagertha's territories and interests. Lagertha admits that Kalf has earned her trust over the past year. Changing the subject, Lagertha says that she's received another marriage request. But she wonders why Kalf, who has made himself almost indespesible to her, has never asked for her hand. Kalf explains that people might assume he had greater ambition and that would not do either of them any good. Kalf goes on to tell her that Einar still hates her and encourages his family to rise up against her rule.

In Kettegat, Þórunn dreams of sailing to England. Björn disapproves of the idea, despite Þórunn describing her combat training with Lagertha. Björn still disagrees, supposing that she is carrying his child, which could be lost in a fight. Þórunn is adamant and insists on going to Wessex.

Laughing and running, Ragnar plays with Ubbe, Hvitserk, and Sigurd. Aslaug enters, carrying Ivar, which brings the play to a halt. She asks the boys not to stop on her account, but Ragnar is done and inquires about "Boneless." "Ivar is what he is," responds Aslaug. Ragnar insists that he loves his sons, but Aslaug wants to make sure his love includes Ivar as well.

Floki laments that his family makes him feel too happy, which in turn makes him feel trapped. Helga is too reasonable, he says, and whishes that she was more angry with him. Helga says, "Yes I am angry with you, Floki, but it does not help, either." She suggests that maybe his trip to Wessex will change how he feels. Floki suggests that he might die in Wessex, and storms off, exclaiming, "You're so horribly good, Helga."

Ragnar finds Asluag trying to comfort a crying Ivar. Aslaug questions whether or not Ragnar really cares about Ivar's suffering. He insists that he loves his son. Aslaug challenges Ragnar futher, "Do you love me?" Ragnar only stares at her in silence.

When the Northmen arrive in Wessex, King Ecbert informs Ragnar that to receive their promised land, the Vikings must fight for Princess Kwenthrith to appease King Ecbert's nobles. Lagertha is unsure about joining, so King Ecbert offers her the job of leading the Viking settlers in Wessex. The warriors proceed to Mercia and the settlers to the land to farm. The Viking warriors defeat Kwenthrith's uncle's army. 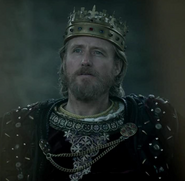 The Battle of Mercia's Landing

The Battle of Mercia's Landing