For the eponymous episode, see The Buddha.

Olaf Haraldsson (also spelled Olav), called Olaf the Stout (Ólafr digri), was a Norwegian king. Ivar was interested in an alliance with him.

Ivar the Boneless receives an emissary from King Olaf to perhaps forge an alliance and invade England. Ivar sends his brother Hvitserk away from Kattegat to ensure that he doesn't conspire against him from within by sending him to Ringerike to meet with King Olaf.

Hvitserk arrives in Ringerike and meets with Olaf. Olaf inquires what sort of monarch Ivar is, and Hvitserk denounces his brother as a tyrant. Hvitserk requests Olaf's assistance in his plan to attack Kattegat and overthrow Ivar. Amused, Olaf has Hvitserk imprisoned and tortured by his steward Canute. When Hvitserk refuses to maintain loyalty to his brother in the face of death, an impressed Olaf decides to help Hvitserk overthrow him.

Olaf and Hvitserk are on their way to Kattegat with a large army. Olaf expresses his concern that their journey is a deliberate march to their own deaths, but Hvitserk dismisses this concern and states that Ivar's great renown is nothing but false rumors birthed by fame.

Olaf is one of the commanders of the attacking side at the Siege of Kattegat. At first he is reluctant to fight Ivar, instead suggesting to sue for peace. However, Bjorn convinces him otherwise. During the heat of the first assault, he delivers a charismatic speech to the attackers. After Ivar's defeat and escape, he declares Bjorn king of Kattegat.

Olaf the Stout was a descendant of Harald Fairhair and a member of the Fairhair Dynasty (Hårfagreætta). As a petty king, he converted to Christianity and played a leading role in the Christianization and unification of Norway. He would rule as King Olaf II of Norway. He is a universally recognized saint of the Roman Catholic Church, canonized saint of the Eastern Orthodox Church, a commemorated historical figure in the Lutheran and Anglican churches, and a celebrated figure in Norwegian culture. He is remembered in Norway as "Olav den hellige" (Olaf the Holy).

Olaf was born in the year 995 in Ringerike, Norway to King Harald Grenske and Queen Åsta Gudbrandsdatter, and was killed on July 29, 1030 at the Battle of Stiklestad by the pagan rebel Thorir the Hound. In 1164 he was declared a saint by Pope Alexander III. He was the half-brother of another famous Norwegian king, Harald Hardrada. 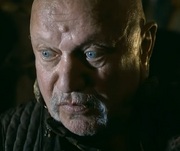 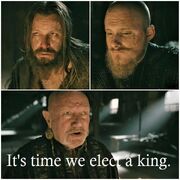 Retrieved from "https://vikings.fandom.com/wiki/Olaf?oldid=47948"
Community content is available under CC-BY-SA unless otherwise noted.