On the Eve is the nineteenth episode of the fourth season of Vikings. It is the forty-eighth episode of the series overall. It first aired on January 25, 2017. It was written by creator Michael Hirst and directed by Ben Bolt.

The Viking Army causes panic in the English countryside as King Ecbert and Aethelwulf plan the defense of the realm. Kattegat is put under siege by Egil. Bjorn and Ivar fight over control of the Great Heathen Army.

Kattegat is attacked by Egil and his men, but they are repulsed and Egil is captured, Torvi is injured while defending the city. Under torture, Egil confesses to Lagertha that he had been paid by King Harald to attack her. Meanwhile in Mercia, terrified villagers flee before the advancing Great Heathen Army. Harald pretends to forgive Ellisif, then kills her husband Vik. Ellisif later pretends to forgive Harald, seduces him, and is about to kill him but is killed herself by Halfdan. Aethelwulf gathers a large army in Wessex and moves to intercept the advancing Vikings. Before they meet, Ivar persuades Bjorn to scout a potential battlefield and plan to use the terrain to defeat the Saxons. The following day, the Vikings surprise the Saxons by ambushing them from the woods on each side of the battlefield, until they have them surrounded near Repton.

Additional Cast (in order of appearance) 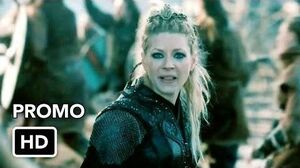 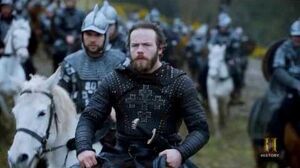 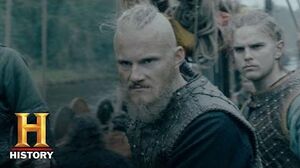 Vikings Recap On the Eve (Season 4, Episode 19) History
Add a photo to this gallery

Add a photo to this gallery
Retrieved from "https://vikings.fandom.com/wiki/On_the_Eve?oldid=47293"
Community content is available under CC-BY-SA unless otherwise noted.