In the Great Hall of Kattegat, a seer reads Earl Haraldson’s future and tells him that Ragnar Lothbrok searches for his death. The unanswerable question is whom do the gods favor more? As a man willing to defend his power and status to the death, Haraldson intends to take precautionary measures. Ragnar, his home and farm burned by the Earl, is hurt but hidden safely away. He must now choose the path that will lead him back to his freedom.

Earl Haraldson and Siggy bless babies. Ragnar and Athelstan head down the river. Athelstan asks Ragnar if he's still a slave. Ragnar says does it make a difference. Athelstan says that he'd like to be a free man. Athelstan asks Ragnar what he's preparing for. Athelstan says that he's watched him and that he's about to do something. Ragnar says that he isn't strong enough and Athelstan asks what the gods say. This upsets Ragnar who tells Athelstan to finish cleaning the fish in silence. Earl Haraldson gathers his men. Ragnar goes hunting. While he's away his village gets attacked by Earl Haraldson. Lagertha gives Athelstan a weapon and tells them to stay strong while they wait for Ragnar to return. Ragnar makes it to his house but he gets shot in the process. He makes his family go beneath the house so that they can get to the boat. Ragnar surrenders, giving his family time to escape. Ragnar manages to escape but they give chase.

He leads them to a cliff where he jumps off. He lands in the water but Athelstan has to jump in and grab him. Earl Haraldson asks if he's dead and they tell him that they don't know. The Earl tells them to seize his boat and if they find his family to bring them to him. Ragnar and his family sail to Floki's home. There they seek his help because Ragnar is dying. Earl Haraldson sets his daughter up with Earl Bjarni and this upsets Siggy. Lagertha, her children, and Athelstan all say prayers to their gods to help heal Ragnar. Earl Haraldson tells Siggy that this marriage will bring them land and important alliances. Haraldson tells Siggy about the shallow grave that the killers dug for his sons. How they cut their heads off and put their faces against their asses as a sign of disrespect. He hands her locks of hair from their heads that he took.

Ragnar gets a visit from Torstein who tells them that they are also being watched. Later, at night, Torstein asks him what Ragnar is going to do. Ragnar says he can't do anything until he's healed. His friend also tells him that the boat has been confiscated and that it's now going to be Thyri's dowry for her upcoming marriage. Rollo attends Thyri's wedding. Earl Haraldson tells Rollo that that could've been him dancing with his daughter. Rollo says he wasn't fated to marry her. The Earl asks why he's here and Rollo says that they should talk. Rollo tells him that Ragnar is dead. He tells him that he wants to be a part of the raiding and no longer on the outside. The Earl tells him that he can live with him and work on his boats and then they shall see. Rollo agrees.

Floki tells them about Valhalla and the Gods. He asks Athelstan how he thinks the world was made. Athelstan doesn't say anything. Rollo gets a visit from Siggy. She tells him that he should leave because her husband hates him. He's walking through the village when he gets clubbed. He's taken to Earl Haraldson's house where he is chained to the table. The Earl asks him where Ragnar is but Rollo says that he is dead. The Earl says that he'll help him tell the truth and takes a knife and starts cutting through his cheek. Torstein returns to Floki's to tell them about how Siggy visited him and told him about the trick the Earl played on Rollo. How the Earl tortured Rollo. Torstein tells him that the Earl is going to kill Rollo and Floki tells Ragnar that it's a trap. Ragnar asks Floki to go to Kattegat and demand a one-on-one combat from the Earl. That if the Earl refuses then shame will stalk him for the rest of his life and he'll never be welcomed into Valhalla. 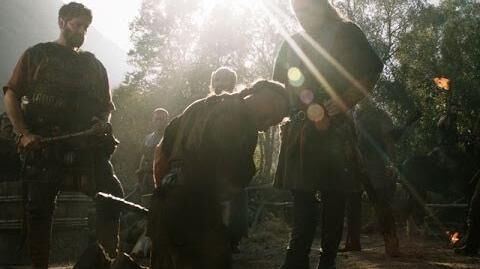 Retrieved from "https://vikings.fandom.com/wiki/Raid?oldid=48537"
Community content is available under CC-BY-SA unless otherwise noted.