View source
watch 01:33
Wiki Targeted (Entertainment)
Do you like this video?
Play Sound

The traditional pilgrimage to Uppsala to thank the gods brings a torrent of emotions for Ragnar, Lagertha, and Athelstan. Ragnar, pulling farther away from his wife, goes to make peace with the death of his unborn son. Lagertha, still reeling from her miscarriage, wants to find out from the gods if more sons are in her future. As the Vikings come together to sacrifice and give thanks to their gods, Athelstan discovers just how strong his Christian faith remains.

Ragnar tells Athelstan that during this time of year they usually make the pilgrimage to Uppsala. That this year he wasn't going to go because he was too busy. But then his unborn son is taken from him and he wonders what he's done to anger the gods. He's decided to go and to take the children with them since it will be their first time. He asks Athelstan if he'll come with them. Athelstan says that yes he'll go with them. Lagertha notices that Ragnar is distant and asks him if he's not happy that they are going on this pilgrimage. Ragnar is upset because of the loss of his son but Lagertha says that they can have more sons. Ragnar points out that they've been trying and it hasn't happened again.

Ragnar and his group arrive at Uppsala. Ragnar asks Odin who will bear his sons since Lagertha cannot. Athelstan learns that there is nine of every sacrifice, including humans. Athelstan is offered drink and shrooms. Lagertha notices that Ragnar wants to go out into the festival. She begs him to stay. Athelstan is high and wanders around the festival. He runs into Ragnar who goes around him. Thyri approaches Athelstan and kisses him. She leads him off to somewhere they can be alone. Gyda tells Lagertha that she's bleeding and Lagertha says that she is a woman now. Thyri bathes Athelstan. Athelstan asks Thryi why she does this and she says that she has to.

Ragnar comes and brings Athelstan to meet King Horik. Ragnar offers him his fealty and his service to Horik. Horik accepts and asks what he can do for him in return. Ragnar says that he wants to send bigger raiding parties to the West. Horik agrees to help Ragnar sail West and discover new worlds. Siggy is upset at Rollo for coming back to their tent after having been with other women. He asks her why she keeps pestering him and that he is who he is and that he won't change. He tells her that one day he'll be a great man and she'll regret leaving him just because he sleeps with other women. She tells him that he needs her just as much as she needs him. That he would've known about Ragnar's meeting with King Horik if he'd been with her.

King Horik says that he wants to put Ragnar's fame to use. Ragnar asks for what and Horik tells him about Borg and how he claims to be entitled to some of Horik's land. That he threatens Horik's territory. Ragnar asks how he can be of help. Horik asks if Ragnar he'll travel to Borg as his emissary. That if Ragnar is successful, Horik will be forever in his debt. Athelstan is pulled aside by the Seer. He's taken to the temple and asked by one of the priests if he came here of his own free will. Athelstan says yes. The priest asks him if he's still a Christian. Athelstan says no but the priest makes him say it three times. The priest asks if he knows why he's here and tells Athelstan that he's been brought to Uppsala as a sacrifice. Athelstan tries to grab hold of his cross pendant but the priest catches his hand and reveals that Athelstan was lying.

The Seer tells them that Athelstan is unworthy of being a sacrifice. That one of them amongst their group must volunteer to be a sacrifice. Leif volunteers to be sacrificed for the sake of his family and friends. Athelstan, Ragnar, and his family watch as the sacrifices are killed. 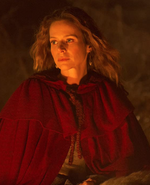