watch 01:29
Wiki Targeted (Entertainment)
Do you like this video?
Play Sound

The hit scripted drama series centers on Ragnar Lothbrok, a restless young warrior and family man who longs to find and conquer new lands across the sea and claim the spoils as his own. Now he is an Earl, allied with King Horik. With more power than ever before, his desire to sail west and explore new kingdoms remains unquenchable.

Yet there's a heavy price to pay for Ragnar's ascent to greatness. Season two brings crises of faith, of power, and of relationships. Brothers rise up against one another. Loyalties shift from friend to foe, and unlikely alliances are formed in the name of supremacy. Ragnar's indiscretions threatens his marriage to Lagertha, tearing him and his beloved son apart. Plots are hatched, scores are settled, blood is spilled... all under the watchful eyes of the gods.

This season draws comparisons and analogies between the characters and the Norse gods[1]. Take note that the details listed below reflect only the events known in the early part of the season and has changed since:

Ragnar Lothbrok is still as pursuant of knowledge as ever, and is seemingly willing to sacrifice what he must for glory, much like Odin, who sacrificed his eye. Both will invite any pain to achieve the fame and wisdom they so desperately desire, in Ragnar's case, even taking on a brother in battle. And just as "Odin feared that his ravens will one day abandon him in time of need, Ragnar fears that in his quest to rise above the rest, he will lose all connection with who he once was."

Two aspects of Freyja are distributed to two women: Lagertha, who welcomes her warrior aspect, and Aslaug, who receives her fertility. Lagertha decides to surrender her femininity after she is struck by constant pain and loss, while Aslaug loves and bears the children of a man whose fate she fears. Lagertha is also associated with Frigg, who had only one son, Baldr, with Odin, but has several step-children, through Odin's several encounters. Lagertha is also seen weaving often, likely an allusion to Frigg being the sky goddess responsible for weaving fates, among other things.

Ragnar chooses to stand firm with King Horik, the ruler who has yet to prove that he is an ally and whose intentions are still unclear. Apparently sort of like red rooster Fjalar, which alerted the gods to the start of Ragnarök, Horik might fuel the fire between Ragnar and Rollo. The scales of a snake hidden underneath his skin, Horik is possibly the shape-shifter Loki, the father of the Midgard Serpent Jörmungandr, who not only seeks out trouble but dares accelerate the conflict.

King Ecbert, a new foe to Ragnar, is compared to Fenrir the wolf that comes, eyes aglow, to tear the Vikings apart and shake their faith. In his presence is a deer, symbolic of Dain, one of four harts, that gnaw at Yggdrasil, who signals Death.

Meanwhile, Rollo, wilder and more envious of his brother as ever, is paralleled also to the wolf Fenrir, now too wild to chain. While Fenrir was destined to kill Odin at Ragnarök, Rollo bides his time and circles his brother.

Floki, although often compared to Loki the trickster, is, in this season, Heimdallr. Much like Heimdallr, who was the first to foresee Ragnarök, Floki must bear the weight of a vision so dark it threatens to ruin Ragnar. He alone sees Rollo for what he is capable of and the danger he embodies. Floki drowns his fears for his friend in drinking, hiding his thoughts behind bright smiles (Floki had gold teeth in promos, just like Heimdallr). As destruction looms, Floki seeks solace in the dark corners of his mind.

Siggy is Sigyn, her loyalties as fluid as the poison from the bowl Sigyn almost spilled onto her husband Loki's face. However, unlike Sigyn, who collected the snake's venom before it could drip onto Loki's face, Siggy drops the bowl, betraying those closest to her. She may play the devoted wife; but she is above all a ruthless survivor.

Bjorn Ironside is associated, by King Horik and Floki, to Odin's favorite son, Baldr, who was made invincible by the gods. Much like Baldr, Bjorn is formidable, "untouched" by his enemies in battle.

After the success of the first season's ratings and the critical response, the show was renewed. It was officially announced on April 5, 2013, halfway through the second season's run. 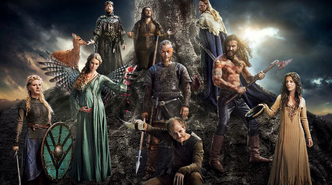 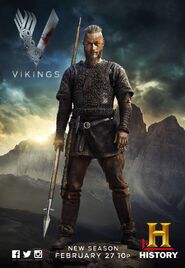 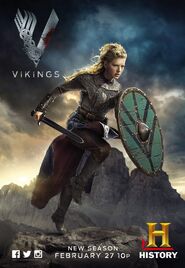 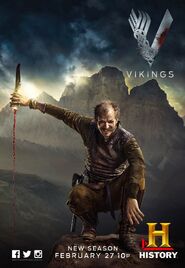 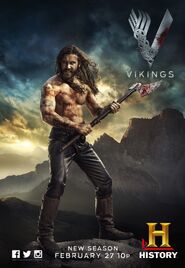 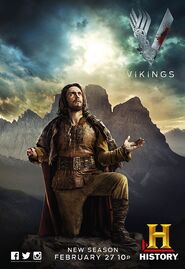 Retrieved from "https://vikings.fandom.com/wiki/Season_2?oldid=43097"
Community content is available under CC-BY-SA unless otherwise noted.