View source
watch 02:22
Who is Siggy Bjornsdottir?
Do you like this video?
Play Sound

This article is about Bjorn's daughter. You may be looking for Earl Haraldson's wife.

Bjorn and his mother are thrilled with the child, though Þorunn has fallen into a deep depression following the birth of her daughter and a battle which left her face scarred. She believes she is unable to care for her daughter and asks Aslaug to take her instead. Aslaug refuses and calls Þorunn selfish, regardless, Þorunn eventually abandons her daughter in Kattegat with Aslaug.

Aslaug, still caring for Siggy, shows Bjorn his daughter though he also refuses to take Siggy since she reminds him of Þorunn. Left with no other options, Aslaug promises Bjorn that she will take care of her.

Later, we see Siggy is mostly left to fend for herself. She plays with Sigurd who notices that she is very dirty, implying mistreatment and neglect. Although Siggy fears to leave the Great Hall, Sigurd insists, and Siggy is later found dead by Sigurd, lying in the mud in a stream below a bridge.

Sigurd mentions her death to both Aslaug and Ivar, who pay little attention. Aslaug is obviously drunk. Siggy's death also doesn't seem to affect her father, Bjorn, either.

Siggy with her father Bjorn and grandmother Lagertha

Bjorn with his newborn daughter 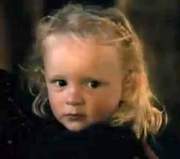