This article is about The Third Son of Ragnar Lothbrok. For Rangnar's Father, see Sigurd Hring.

Unintentionally killed with an axe thrown by Ivar

The Joke, The Best Laid Plans

Sigurd Ragnarsson or  Sigurd "Snake-in-the-Eye" was the third son of Ragnar and Aslaug. Through Ragnar, Sigurd was descended from the Volsungr (descendants of Odin through his great-grandson Volsung) and the Ynglings (descendants of Frey) through his mother.

In the Fourth Season, Sigurd was shown to be a precocious child who witnessed the effect a returning Harbard had over his mother and the womenfolk of Kattegat.

At the end of Season Four, he is killed by Ivar, after constantly belittling him.

Aslaug had prophesied that he would be born with the image of the serpent-dragon Fafnir in his eye, the same one her father Sigurd killed. When he was born so, Aslaug named him "Sigurd Snake-in-the-eye" after her father and because of the mark on her son's eye.

He was seen in the great halls playing with Ubbe and Hvitserk.

When Ragnar embarks on his second expedition to Frankia with his two older brothers, Sigurd becomes lonely without them. The young boy notes the neglect of his niece, Siggy Bjornsdottir, and goes to ask his mother to bathe her, but comes upon Aslaug breastfeeding his younger brother Ivar (who is at least four at this time).

When Harbard returns to Kattegatt, Sigurd is the only person to resent his presence and fears the influence he has over his mother. Later, he discovers Harbard sleeping with other women in the town, and reveals this to Aslaug.

After turning Harbard out, Aslaug falls into depression. Sigurd soon finds the body of young Siggy, who had drowned in nearby creek. He finds Aslaug drinking heavily and idly playing Tafl with Ivar, who mocks his mother with her poor gamesmanship, to which she drunkenly retorts that he's alive because of her. Sigurd tells his mother that young Siggy has died. Aslaug snidely replies that someone should have been looking after her (despite earlier assuring Bjorn that she would be doing just that). Ivar nastily proclaims "who cares?" Sigurd runs from the hall, upset and horrified by their indifference.

Ragnar returns from his lengthy absence, though prior to this Bjorn relays news he obtained from a warrior, who raided in Wessex. The settlement that Ragnar had secured with King Ecbert of Wessex was destroyed soon after his party had left. At a mountain hunting lodge, Sigurd, along with his full brothers, Ivar, Ubbe, and Hvitserk, noted disgust at this happening, and their disappointment at Ragnar abandoning them as children. Bjorn however told them that their father left due to being broken, following their uncle's treachery and the defeat in Paris, and that despite this he was a man, not a God, and the greatest man in the world to him.

Sigurd forms a brief casual relationship with Margrethe, a slave girl in the employ of his mother, Queen Aslaug. He shares this affection with his full brothers, though not with Bjorn due to his marriage to Torvi.

Once Ragnar returns, he initially challenges his younger sons (especially Ubbe) to kill him and take the kingship. They refuse, and all five sons engage in a brief discussion, asking why their father returned. Sigurd, along with Ubbe, had opted to stay and protect their mother in Kattegat, and not opt to raid with Bjorn and Hvitserk in the Mediterranean.

Bjorn's mother, Lagertha, had long-held plans to take Kattegat, as revenge for her perceived loss of Ragnar to Aslaug's sorcery. Lagertha lured Sigurd, Ubbe, and Margarthe to Hedeby, as a distraction once her forces launched an attack. Lagertha's assault was successful, and once obtaining the Sword of Kings from Aslaug, killed her in the aftermath. His mother's death did not affect him, due to his perceived neglect from her as a child. Unlike Ubbe and Ivar, he was far less inclined to avenge her death by killing Lagertha.

Soon after, he hears words that Ragnar had died, at the hands of King Aelle of Northumbria. Ivar, who had accompanied their father on a mission to England, had first-hand knowledge of this development during a stay at King Ecbert's villa and was transported to Kattegat on Ecbert's orders. Ubbe and Siguad inform Ivar of the death of their mother, which Ivar is very angry about and is consumed by vengeance. Later while Ivar is sharpening his ax to kill Lagatha Ivar asks why Sigurd isn't affected by their mother's death, Sigurd says because of her perceived neglect from her as a child and that all he remembers her as cold and distant and that she didn't love anyone except for Ivar or Harbard. Ivar mocks Sigurd saying he feels sorry for himself and that Aslaug was still his mother and what kind of son is he if he doesn't want to avenge his mother. Sigurd then mocks Ivar calling him a "Mummy's boy" and "Mummy's little favorite" and asks him whether the real reason he misses his mother is that she can't breastfeed him anymore. Ivar is furious and was about plunge his ax into Sigurd's neck but the blacksmith grabs his arm and stop him mid-swing and asks who would have thought that they were brothers. It was Sigurd's suggestion that a Great Army be forged, seeking as many alliances as possible in order to accomplish full vengeance on the English kingdoms.

Though Ivar informed him of their father's death, the supreme Norse god, Odin, also appeared to all of the sons, to say that Ragnar was killed by snakes. This spurred all of the sons of Ragnar to assemble the Great Heathen Army readily, to avenge their father's death. When in England, he participated in the Battle of York, and witnessed the blood eagle of King Aelle. He also fought along his brothers against then Prince Aethelwulf at Repton, and in the capture of Ecbert at his villa.

He did, however, hold a long-running feud with his youngest brother, Ivar. This was in part due to a clash of personalities, and in part jealousy, as due to Ivar's condition their mother often favored him over Sigurd. In a celebratory feast in the former Wessex royal villa, Bjorn as leader of the Army gave several toasts to victory and the destruction of two English kingdoms. Whilst discussing the way forward, he and Ivar got into a heated argument and exchanged many insults and curses, especially that their mother Aslaug has never really like him. In a rage, Ivar threw an ax at Sigurd, which lodged in his left abdomen. He stumbled slightly, in an attempt to retaliate, but ultimately fell and died Ubbe cradles his body in grief and looks at Ivar in anger, Ivar, however, doesn't show any remorse. He is the first son of Ragnar to die, following the recent death of their father, and may join him in Valhalla as one falling to an enemy in battle.

Out of all of his brothers, Sigurd was the most resentful his mother, Aslaug. Recalling her to be cold and distant towards him, and was disgusted with her attitude when Siggy died from her neglect, which Aslaug seemed to be elated at. This resentfulness extends to his brother, Ivar, due to his psychopathic tendencies and being coddled by Aslaug up until her death, who seemed to have been intentionally been exacerbating Ivar's mentality. As young men, Ivar and Sigurd held a deep mutual dislike for each other, with Sigurd intentionally enraging Ivar for being a cripple and Ivar going into fits of rage. This feud was eventually the end for Sigurd, who angered Ivar to the point of launching an axe into him. Sigurd's last minute of life entailed him trying to kill Ivar with the same axe. 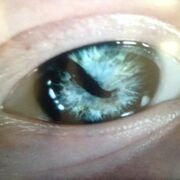 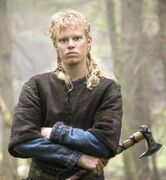 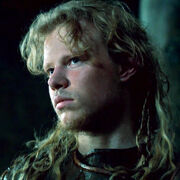 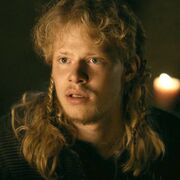 Retrieved from "https://vikings.fandom.com/wiki/Sigurd?oldid=42082"
Community content is available under CC-BY-SA unless otherwise noted.