The Departed Part 1 is the fifth season premiere of Vikings and fiftieth episode overall that aired on November 29, 2017 as part of a double episode premiere.

Tensions mount between the sons of Ragnar Lothbrok; with King Aethelwulf and his family still in hiding, Heahmund, the warrior bishop, rallies the Saxons to defend the Realm, as the Great Army moves to take York.

Ivar is blamed for Sigurd's death. He admits to killing him but only because Sigurd made him do it by taunting him. Bjorn says that it's no concern of his as he's sailing back to the Mediterranean with Halfdan. Harald returns to Kattegat to tell Lagertha that they avenged Ragnar's death and defeated the Saxons. Heahmund arrives at King Ecbert's villa but finds it destroyed. He directs his men to find King Ecbert's body among the rubble. Harald asks Halfdan if he is sure that he wants them to separate. Halfdan tells him that Harald has a dream of becoming King of Norway but he doesn't want to be known as the brother of the King of Norway. Harald says that he'll miss him because everyone needs a brother to cover their neck. Bjorn and Halfdan board the boat. Heahmund searches through the rubble alongside his soldiers. They find King Ecbert's remains having been stored in a water barrel. Heahmund says that they must rebuild the villa.

Ivar goes to visit Floki and learns that he's building a one-man boat. Ivar asks where he's going to sail it to and Floki says to where the Gods decide. Ivar begs him to stay because he will be too lonely. Floki tells him that he has to leave because this world no longer interests him. He invites Ivar to go with him. Bjorn and Halfdan sail away. King Ecbert is given a funeral led by Heahmund. One of the priests reveals themselves to Heahmund having survived the attack from the Northmen. The priest tells them that he witnessed the treaty signed by Ragnar and his sons for the land. The priest reveals that it wasn't King Ecbert's land to sell because he'd renounced his crown and given it to Prince Aethelwulf. The grant of land is worthless. Aethelwulf is in exile with Judith. Alfred is ill but Judith doesn't know if he's dying. Aethelwulf is convinced that this is the work of God and that he's punishing them because of their sins. Ragnar's sons try to stop Floki from leaving but Floki has his mind set. As he leaves, the men gather along the water and chant his name.

Heahmund lays on King Ecbert's tomb and asks him to help them in battle against the Northman. The people return to the villa after Heahmund tells them that it's safe. Ubbe wants to settle the land given to them by Ecbert but Ivar wants them to head back to the coast and settle there so that they can raid whenever they want. Ubbe says that their father wanted them to do more than just raid. Ivar tells them about York and that they should take it. Hvitserk agrees with Ivar that they should go North. Floki discovers that Ivar gave him Ragnar's map to guide him but throws it into the ocean. Heahmund is approached by Aethelgyth. He gives her communion. Later, Heahmund runs through a thicket of thorned limbs in order to punish himself for his sins. Ivar, Hvitserk, and Ubbe devise a plan to attack York on one of their Saints days since the people will either be in church or drunk.

Ubbe captures two little boys from the town. They learn from them that in three days it will be Ascension Day. They attack the city of York and conquer it easily. In Kattegat, Torvi trains with Guthrum. Harald arrives in Kattegat. He tells Lagertha that Bjorn's army succeeded in avenging Ragnar's death and how King Ecbert gave them a gift of land. He also tells Lagertha about Sigurd's death as well. She asks why Bjorn didn't come in his place. Harald tells her about how he's sailing in the Mediterranean. Lagertha asks why he really came to Kattegat. How he expected to find Egil on the throne keeping it warm for Harald. Harald says that perhaps he did. Lagertha orders one of her women to point a sword at him. Harald says that he isn't afraid to die and dares her to kill him. 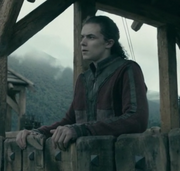 Add a photo to this gallery
Retrieved from "https://vikings.fandom.com/wiki/The_Departed_Part_1?oldid=48382"
Community content is available under CC-BY-SA unless otherwise noted.