watch 01:05
'Vikings' Recap: The Reckoning
Do you like this video?
Play Sound

The Reckoning is the twentieth episode and fourth season finale of Vikings. It is the forty-ninth episode of the series overall. It first aired on February 1, 2017.

Prince Aethelwulf finds himself subject to the Vikings' battle master plan; Ecbert remains behind with a plan of his own.

The West Saxon forces under Prince Aethelwulf meet the Great Heathen Army in a large hollow, and initially fighting very bravely. However, they steadily lose men, and Aethelwulf whilst recognising defeat was imminent ordered his men to retreat. The Great Heathen Army, and the sons of Ragnar, were all elated at their victory.

Prince Aethelwulf and his forces returned to King Ecbert's villa, and demanded immediately that the villa be evacuated and abandoned. King Ecbert however decided to stay behind, to Aethelwulf's dismay, but said he must out of "his destiny." He then stated he would abdicate the throne to Aethelwulf, thus making him King of Wessex and Mercia. A brief ceremony is held by Bishop Edmund, where Ecbert formally abdicated the kingship, with King Aethelwulf now masterminding the West Saxon defence. Ecbert made a tearful farewell to King Aethelwulf, Judith, and his grandchildren, Aethelred and Alfred. He noted to Alfred, as part of his special destiny, to treat all alike from kings to shepherds and always be wise and studious. Bishop Edmund stayed with him, to comfort his friend, to savor the extensive wine cellars before they are pillaged by the Great Heathen Army, and to be close to his church when he dies.

The Norsemen came to the villa, and initially charged, breaking in but seeing the place seemingly empty. King Harald and Halfdan searched, but initially found nobody. After a while, they discovered some West Saxon troops, killed them and then found Ecbert, by now the former King of Wessex and Mercia. The sons of Ragnar disagreed on how to kill him, but eventually struck up a deal in which Ecbert's intent to stay behind was now evident. He got an English monk to sign a document, in which in his "authority" as King, granted East Anglia to the Northmen. Unbenknownst to the Norse, they did not realise that Ecbert was no longer King of Wessex and Mercia, presumably thus making the contract null and void. Bishop Edmund, in the midst of the villa being ransacked, was killed by Hvitserk, quoting Jesus' words in his crucifixion. In return, Ecbert wanted to choose how he would die, to the dismay of Ivar and Sigurd, who wished to blood eagle him like King Aelle. The sons of Ragnar had arguments over the next move, with Bjorn Ironside wishing to go back to the Mediterranean, and Ivar wishing to continue raiding England. Things came to a head, with Ivar killing Sigurd with an axe in rage after an argument.

Tragedy hit Floki, when Tanaruz, an Arab girl whom Helga took from Algeciras in the Spanish Caliphate, killed Helga out of revenge for her displacement, and in turn committing suicide. Floki buried Helga, and disraught, said that he was now hollow and waiting for the gods to show him his fate. Ecbert, former King of Wessex and Mercia, received a knife from Bjorn, in his Roman bathhouse, and slashed the veins in both arms whilst reminiscing on the major events of his life in recent years. He died, knowing that he had at least brought his son, and now successor King Aethelwulf, time in the kingdom's fight against the Northmen.

In Sherbourne, Bishop Heahmund is conducting a funeral amidst a small party. He consoles the young widow Ordlaf and has sex with her. A sword of note bearing the mystical inscription ANANYZAPATA (abbreviation for Antidotum Nazareni Auferat Necem Intoxicationis Sanctificet Alimenta Pocula Trinitas Alma, meaning May the antidote of Jesus avert death by poisoning and the Holy Trinity sanctify my food and drink) is seen, along with a warrior's tunic.

Additional cast (in order of appearance) 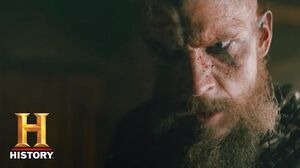 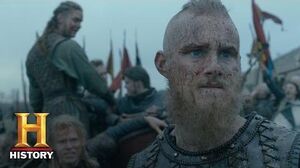 Vikings Recap The Reckoning (Season 4, Episode 20) History
Add a photo to this gallery

Add a photo to this gallery
Retrieved from "https://vikings.fandom.com/wiki/The_Reckoning?oldid=48583"
Community content is available under CC-BY-SA unless otherwise noted.