View source
watch 01:13
'Vikings ' Profile: The Seer
Do you like this video?
Play Sound

The Seer is the Oracle of Kattegat.

The Seer's past is as obscure as his own character. His appearance is deformed, and it is unclear if this is congenital, a result of disease, or even the result of violence. His eyes were either sewn shut or skin grew over his eyes. In either case his appearance is quite disturbing. Furthermore, despite his apparent blindness, it often seems like he can in fact see. He wears a dark cloak and prefers environments with very poor light.

His shamanic abilities, including visions, make him one of the most revered characters in Kattegat. Enjoying a status oftentimes more momentous than the king himself, he is seen as straddling two worlds, and in contact with the gods. These rarest of abilities make him not only honored and valued, but also essential. Because the Vikings believe their fate is already decided by the gods, they often turn to the Seer to translate the gods' wishes and intentions.

Ragnar Lothbrok visits the Seer with his son Bjorn after Bjorn receives his arm ring to become a man. Ragnar is seeking the counsel of the gods regarding his desire to sail west. Ragnar asks the Seer what the gods have in store for him. The Seer gives him good news, saying the gods desire him to have a great future, but that they can withdraw their goodwill at any time. When Ragnar asks if he should challenge the law, the Seer gives him a vague answer, leaving a dissatisfied Ragnar to ponder the Seer's words. After receiving his counsel from the Seer, Ragnar licks his hand in a sign of respect.

Later, Earl Haraldson seeks out the Seer to see what the gods know about Ragnar's plans. The Seer tells him that Ragnar is "searching for his death." Haraldson asks if Ragnar wants to be earl, the Seer replies, "If he kills you, will it not be so?" When Earl Haraldson reveals his doubts about the existence of the gods, the Seer laughs at him as if he is a fool.

Ragnar visits with the Seer to discover the fate the gods have chosen for his sons. The Seer tells Ragnar that his sons will be "spoken of as long as men have tongues to speak." He also confirms to Ragnar that Björn is alive.

Lagertha visits the Seer in the winter before she leaves for Wessex with Ragnar and the others.

The Seer finally meets Floki. Upon their meeting, the oracle tells Floki that he has been waiting for him "in the space between life and death," and proceeds to lick Floki's hand, instead of the traditional other way around.

The Seer appears to be suffering from some unknown illness. As he becomes increasingly ill, it seems to be slowly killing him. However, before this mysterious illness can kill him, Ivar abruptly murders the Seer with an axe to the face.

The Seer has been killed by Ivar, but continues to appear in visions to others. While attempting to settle Greenland, the Seer visits Ubbe in a vision warning him to leave the island.

The Seer appears to Freydis Eriksdotter while she undergoes the ceremony at the temple at Uppsala. The Seer tells Freydis to continue on her path despite her fear. The Seer appears as a hallucination to Jarl Kåre, who carries around an empty cage that he believes holds the Seer prisoner.

The Seer is devoted to the Norse gods. The Seer has a tendency towards sarcasm and cynicism. He is also quite snarky. For example, when Earl Haraldson asks, "Do the gods speak?" the Seer replies, "Do they every stop?" Overall, he is generally rather gruff and keeps to himself. It is unclear if his state of hermeticism is self-imposed or not. His wisdom and knowledge is believed to come directly from the gods. He sees other religions as a threat to the Vikings and their way of life. Despite his isolation, everyone treats him with reverence and respect, no matter their position in society. He does not show any political view or affiliation. He is seen giving counsel to, among others, Ragnar, Earl Haraldson, Jarl Borg, Rollo, Lagertha, and Aslaug. This is probably a result of his belief that the gods are above the laws and concerns of men. The Seer does suffer for his gifts, such as when he is seen being tormented by his dreams. He laments how he is forced to see all the sorrow in people's destinies.

The Seer's prophecies are almost impossible to understand before they come to pass. They often appear deliberately ambiguous, and the Seer himself says that prophecies can only be fully realized and understood once it's too late to change them. After all, the Vikings do believe that fate is preordained. He has said that humanity cannot handle too much of reality, and this also permits some degree of free will for the recipients of his counsel. An example of the ambiguity of the Seer's prophecies is when he tells Jarl Borg he will become an eagle, and it is only after it is too late that Borg learns that his death will be by blood eagle. Another example is when he tells Rollo about his impending dukedom in West Francia, but in a manner that if Rollo knew what was store he "would dance naked on the beach." He tells Rollo that "the Bear will marry a princess and he will be at the ceremony." It's not clear whether he possesses actual magical powers, but the accuracy of his predictions is remarkable. It is always apparent that Seer "knows" a lot more about what is going on around him and what is about to happen than he tends to reveal. For example, when Ragnar asks him if Athelstan resides in Valhalla or Hel, believing his friend to be dead, the Seer states that he is in neither, but is actually alive. It is then revealed that Athelstan is in Wessex when he notices a raven that is apparently watching him from the window. One of the ways he receives prophecies is by reading animal bones. He is frequently less than forthcoming about information that his visitors would have preferred to know about sooner. The Seer tells Ragnar, "I do not lie about what I see... Only sometimes I withhold things, for human beings cannot bear too much reality."

He may actually be one of the gods but in human form. He hints that he is an impossibly ancient, possibly Asgardian creature, whose blessing and curse it is to divine the future as ordained by the gods' themselves. He can't see with his eyes, but he can see through his mind's eye. In one of the episodes of Season 2, the Seer tells Ragnar a story about the marriage of the god Njord and the giant Skadi. He described Njord as a god of the sea, with old and withered skin and large but smooth feet. In the same scene, we can see the entire body of the Seer and his bare feet. One could interpret that scene to mean that the Seer was talking about himself. In many episodes he also admits that he has lived hundreds of years. He may not be actually alive or dead, but something in between. 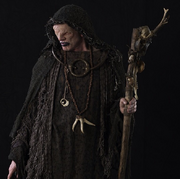 The Seer and Athelstan in Season 1 Episode 8, Sacrifice