Thor (Old Norse: Þórr; meaning "thunder") is the god of thunder, strength, and storms in Norse mythology. Thor is generally the second most popular god among the Vikings, behind only his father Odin.

Along with Odin and Loki, Thor was among the three most important figures in the Norse pantheon. He was responsible for the weather and crops, as well as sea voyages that might be affected by the weather. The cracking of thunder was not regarded with dread by the Norse; instead they they regarded it as a sign that Thor was doing his duty, killing Giants. Thor was associated with thunder, the sky, fertility and the law. Armed with his hammer, Mjölnir, and his girdle of strength, he righted wrongs by killing threats to mankind and the gods. The other gods, notably Loki, took advantage of Thor's simplicity on numerous occasions.

In the series, Thor is referred to numerous times, particularly in Wrath of the Northmen during the thunderstorm on the initial voyage to England. Floki interprets the thunderstorm as a sign that Thor is happy with him and his boat. This is underscored with Lagertha retelling the story how Thor fished for Jörmungandr using a bull's head and how their struggle created a gigantic storm. In Sacrifice, Bjorn asks Athelstan to identify a statue at the Uppsala temple, which Athelstan describes as Thor, defeater of fire and frost. In Death All 'Round, Erlendur performs a blood sacrifice to Thor in order to get revenge for his killed family. Ivar wears the image of Thor's hammer, Mjölnir, as an amulett. Both Athelstan and Rollo agonize over that, despite their apparent Christianity, they still hear Thor in thunder. 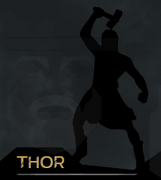 Woodcarving of Thor from The Wanderer

Thor idol at Uppsala, based on the Eyrarland figure and a Scanian Mjolnir pendant