Fimmel was raised on a 5,500-acre dairy farm in Lockington near Echuca in Australia. He is the youngest of three brothers. His mother was a recreation officer for the disabled and his father was a cattle farmer. He aspired to be a professional Australian rules footballer. After a broken leg kept him from playing, he was accepted into the Royal Melbourne Institute of Technology (RMIT) to study commercial architecture and engineering, but later deferred to travel abroad.

Fimmel's modeling career began when he was signed on the spot by LA Models in 2002 after walking into their office broke and barefoot. He became the first male in the world to secure a six-figure deal to model exclusively for Calvin Klein for a year, and the last to be personally contracted by the brand's eponymous designer.

Fimmel studied under Hollywood acting coach Ivan Chubbuck, taking two years to gain the courage to audition for his first role. He starred opposite Patrick Swayze in The Beast. He also had roles in Outlaw Country, The Baytown Outlaws, Harodim, Warcraft, and Raised by Wolves.

He enjoys Australian rules football, fishing, camping, horse riding, surfing, riding motorbikes, and going to the beach. While his career has taken him all over the world, between roles he travels back to his family's farm as much as possible. He currently resides in Los Angels. 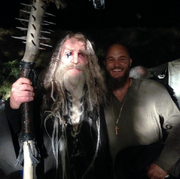 Behind the scenes picture with Odin
Українська
Community content is available under CC-BY-SA unless otherwise noted.