The Vikings head back to England to see what other treasures this new world has to offer. This go around Ragnar and his crew sail out with Earl Haraldson’s permission, and also with Earl Haraldson’s spy. After bloodshed on the beach, the Vikings choose the Sabbath to invade the town of Hexam and unleash a flood of violence and panic. In the midst of the terror, Ragnar and Lagertha discover that there are consequences for every action and Earl Haraldson is always watching.

Ragnar and his group make their way towards the town. Rollo gets upset because Ragnar says that they aren't going to attack until the next day, Sunday. King Aelle is told about the raiders. He wants to know where they come from. Ragnar makes them wait until they hear the church bells before they attack. Once they do, they find the village to be empty because they are all at church. Ragnar invades the church and instructs the priest to tell his people not to resist. Outside, his men loot and raid the village. Knut tries to rape one of the women but Lagertha stops him. He turns his attention to her next. Knut gets her pinned against a wall but she knees him in the balls and kills him. After the raid, Ragnar asks where Knut is and Lagertha tells him that she killed him. He asks if anyone saw and she says no.

They head back to the boat but when they arrive the Saxon's are waiting for them. They engage them in battle. While they are outnumbered, Ragnar's group still manages to win. The Saxon survivings as Lord Wigea flee. Ragnar and his men mourn the death of one of their own, Kauko, and kill the Saxon that led them to the town. Athelstan looks after the children. Bjorn suggests that they head into Kattegat but Athelstan says no. Bjorn says he wants to make a sacrifice to Odin for Ragnar's safe return. Athelstan asks what would he sacrifice and Bjorn says him. Later, Athelstan speaks to God and is angry with him for putting him in this situation. He goes and wakes up Bjorn and tells him that he will take him to Kattegat.

Ragnar and his warband return to Kattegat. He is greeted by Earl Haraldson, who asks where Knut is. Ragnar tells him that he's dead. He lies and tells him that he killed him instead of Lagertha. He tells the Earl that Knut tried to rape his wife. The Earl tells him that he doesn't believe him and has him taken away. Rollo is summoned by the Earl. He tells Rollo that he'll give him some of the pillaged treasure if only he'll step out of Ragnar's shadow. The Earl also introduces him to his daughter. He tells Rollo that the man he chooses to marry her to will be like his own son. Ragnar is brought before the Earl and Siggy. The Earl makes Ragnar out to be the villain. Ragnar asks the men what they would've done if they'd seen Knut trying to rape their wives. Svein asks Ragnar if he's really going to stick to this story. Lagertha tells them that she can confirm that it happened. The Earl says that she's just covering for him because she's his wife. She reveals to all of them that she killed Knut, not Ragnar. The king still doesn't believe her. Svein tells them that they have a witness to the killing. Rollo steps forward.

Rollo tells them that he saw everything. But instead of saying that Ragnar killed Knut in cold blood, he says that Ragnar had a good reason to kill him. Therefore they can't punish him. Ragnar is set free. They have a party. Ragnar thanks Athelstan for taking care of his children. Lagertha thanks Rollo for what he did. Rollo says that he didn't do it for Ragnar. That he did it for her. Suddenly, they are attacked by a group of men. They survive but Erik is killed. Ragnar and his family return to the farm. Ragnar is upset because of his friend's death. He grabs his roll and heads out while Athelstan watches him leave. The Earl seeks the advice of the Seer. The Seer tells him that there will be violence and that Ragnar searches for the Earl's death.

Athelstan asks Lagertha why Ragnar goes and sits up on the hill. Later, he realizes that Ragnar is preparing himself for what's to come. 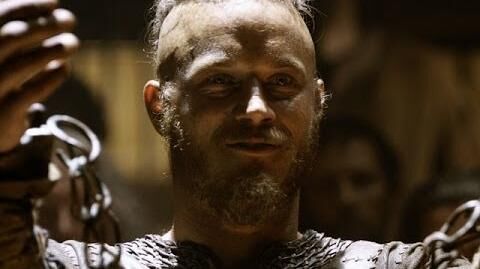 Retrieved from "https://vikings.fandom.com/wiki/Trial?oldid=48536"
Community content is available under CC-BY-SA unless otherwise noted.