Valkyries (from Old Norse valkyrja, "chooser of the slain") are the servants of the gods Odin and Freyja. They are essentially angels of death, hosts of female figures who decide which soldiers die in battle and which live.

hIn Rites of Passage, Ragnar sees a vision of the valkyries carrying fallen warriors off to Valhalla, appearing along with Odin and a flock of ravens. They are referred to at various points in the show.

While half of those who die in battle go to the goddess Freyja's afterlife field Fólkvangr, the other half are selected and brought by the valkyries to the afterlife hall of the slain, Valhalla, ruled over by the god Odin. There, the deceased warriors become einherjar (Old Norse "single (or once) fighters"). When the einherjar are not preparing for the events of Ragnarök, the valkyries bear them mead. Valkyries also appear as lovers of heroes and other mortals, where they are sometimes described as the daughters of royalty, sometimes accompanied by ravens, and sometimes connected to swans or horses.

Scholar Hilda Ellis Davidson has stated from "early times" the Germanic peoples "believed in fierce female spirits doing the command of the war god, stirring up disorder, taking part in battle, seizing and perhaps devouring the slain." The Valkyries are frequently associated with birds in Norse art, maybe due to the various birds coming to consume the flesh of those killed in battle.[1]

Valkyries descending in Rites of Passage 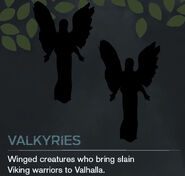 Retrieved from "https://vikings.fandom.com/wiki/Valkyries?oldid=45008"
Community content is available under CC-BY-SA unless otherwise noted.