Wrath of the Northmen

The stage is set for the first journey west by Ragnar Lothbrok as he gathers a crew willing to risk their lives to travel into the unknown. Earl Haraldson’s paranoia reaches new heights as it becomes apparent that trust is hard to come by in this dark era.

Ragnar and Rollo arrives at a secret meeting with their crew about their journey to the west, including Torstein, Leif, and Arne. Rollo points out they will be all equals and thus the profits will be equally shared as well. One man named Knut sceptically asks if there will be any, as Ragnar's dream is just based on stories. Ragnar tells everything start with stories. When Erik warns about Earl Haraldson's order to go East, Ragnar assures him the Earl does not know about their boat. Ragnar further convinces the men that this journey will be an opportunity to shine in battle, to impress the Gods and return with more plunder than they have ever seen. Ragnar personally asks Knut if he is coming, which he agrees to so he can tell his children a good story.

The housecarl, Olafur, notifies Earl Haraldson of the meeting and the presence of Ragnar Lothbrok. The Earl thinks that they should watch first, even though he is tempted to execute Ragnar right away. When the Earl notices the glancing of the housecarl at Siggy, his wife, he asked him if he wants to sleep with her and if so, it can be arranged.

Ragnar arrives at home. Lagertha wants to join him on their journey to the West, but Ragnar declines, as someone needs to keep an eye on the children as Earl Haraldson might claim their home if he discovers the defiance of his orders.

Olafur attempts to sleep with Siggy, but it turns out to be a trap, as Earl Haraldson only wanted to test his loyalty. As a result, Svein kills him by stabbing him in the gut before he is finished with axes.

Lagertha, angry with Ragnar's refusal to take her with him, attacks her husband viciously with a shield before their son, Bjorn, stops them.

At Floki's home, where the crew for the journey to the West assembles the shipwright is waiting for the anchor to be delivered by the blacksmith. As a ransom, he was given a lock of the hair of the blacksmith's daughter. When the Norsemen are preparing to leave, Rollo secretly rapes Floki's slave girl before they depart for England.

Knut, who is Earl Haraldson's half-brother and who was supposed to join Ragnar on his journey, informs the Earl of their departure.

With the sunboard, Ragnar navigates the open sea. They go through a storm forcing them to lower the sail and proceed rowing. Thunder and lightning surrounds the ship, to which Rollo replies Thor is angry with them and strikes his hammer to sink them. Floki however sees it as Thor celebrating because he love the ship he built.

At the Lindisfarne Monastery in the Kingdom of Northumbria, monks are watching out of a window at the raging storm. In the flashes of lightning, a cloud resembling the shape of the prow of a Viking ship can be seen. Concerned, one of the monks named Athelstan goes to the Father of the monastery to tell him Judgment Day has come. The Father does not want to hear of it and orders Athelstan to go back to his dormitory to pray God for forgiveness, as everything will be well when the storm passes.

In Kattegat, the blacksmith who forged the anchor of Ragnar's ship is confronted by Earl Haraldson and his men. At first he denies forging any anchor, but when Svein is about to seize his daughter, he gives in. Earl Haraldson orders him to look at the flames in the firepit and asks what he sees. When the blacksmith answers he sees his death, Svein pushes his face in the fire despite the blacksmith's daughter pleading to leave her father be.

On the sea, Hakon loses faith and accuses Ragnar to be a madman in league with Loki, sending them to their doom. Unable to calm him, Ragnar has no choice but to kill Hakon and throw him overboard. Ragnar orders the ravens they took with them to be released. If they return quickly there is no land, if they don't come back they have found land. When they hear the flapping of bird wings, Ragnar thinks the ravens returned and his journey is in vain. However, the birds turn out to be seagulls, indicating they are close to the shores of England.

A monk notices the arriving Viking ship and alarms the Monastery. Hearing the bells, Ragnar realizes their presence is noticed. The monks takes refuge in the church. Hearing their prayers, Ragnar forces open the doors of the monestary and he and the Vikings enter. As the monks continue with their prayers, Rollo suddenly kills the Father causing panic under the monks of which many are slaughtered by the Norsemen, while Ragnar solemnly looks.

Seeking through the buildings, Ragnar, Leif, and Erik find the treasury room. Surprised the treasures are left in the open, Leif wonders if their God protects it somehow. Ragnar discovers they are not alone and drags Athelstan out of his hiding place. When the monk pleads for his life, Ragnar is surprised he can speak the Norse language, to which Athelstan says he has travelled to Scandinavia in the past. Ragnar asks Athelstan about the book he hold in his hands. It is the Gospel of St. John.

When Ragnar asks why the monk chose to protect that instead of any treasures, Athelstan replies that without the word of God there can be only darkness. Rollo enters the room, remarking it is a strange place with only men. When he notices Athelstan, he insists on killing him but Ragnar forbids it as the monk is worth more alive than death.

Surprised, Rollo reminds his brother they are equals and attempts to kill Athelstan anyway. However, Ragnar pushes his brother back, causing Rollo to angrily chop the crucifix in the room in pieces and telling Athelstan that is how much he respects his God before storming off. Meanwhile, Floki enters a room with many holy papers. Unable to read them, Floki burns one of them eventually setting the Monastery on fire. The Norsemen returns to their ship with treasure and some monks having survived the onslaught, including Athelstan, taken as slaves. 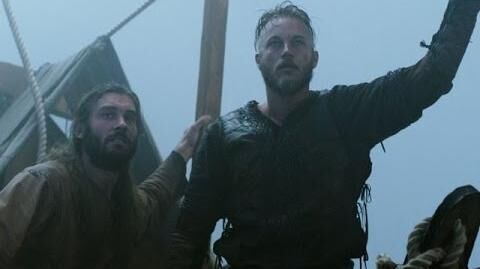 Retrieved from "https://vikings.fandom.com/wiki/Wrath_of_the_Northmen?oldid=48534"
Community content is available under CC-BY-SA unless otherwise noted.